Just found out about yet another book we all just gotta read in order to save America. 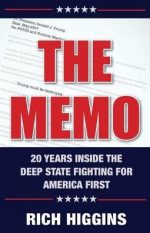 After three short months in 2017 serving on the National Security Council under President’s Trump National Security Advisor H.R. McMaster, Rich was fired for telling the truth. He sounded the alarm on the Deep State coup to remove President Trump and of the subversives within the ranks. Rich set it all down in his famous memo – POTUS and Political Warfare. And for this, he paid for it with his job.

At the time, Rich was labeled as a “conspiracy theorist” but as events played out over the following three years, Rich has been fully vindicated.

The Memo is the riveting story of how Rich Higgins’ twenty year career fighting for America First within the bowels of the DoD and Pentagon bureaucracy enabled him to discern – well before anyone else – the Deep State’s efforts to stop and ultimately remove the President from office. No one was more bold – or more frighteningly accurate – in anticipating the ferocity of the Deep State’s assault on the Constitution and President Trump.
— The Memo, Barnes & Noble

While Rich Higgins may be a good, “twenty year career” civil servant, he’s also the latest example of someone who could be living comfortably off a taxpayer-funded pension seeking supplemental income off the lucrative name of Donald Trump.

How many pundits, talk show hosts, cable news anchors, journalists, former federal government employees, etc. inundated us during the run-up to the 2016 elections with books containing information we MUST know in order to help elect Donald Trump? You’d think, if this information was SO important to the continuation of the republic, they’d give us that information for free. After all, a vote is a lot cheaper than a $20-40 book a person may read at least once.

Think about all of those cable news personalities who earn six figures or more but that’s not enough. They have to ingratiate us with their musings on the premise that just because they’re now where they are, they are smarter than all of us and the world will be a better place for $25 a pop.

How about all those so-called journalists who are embedded within presidential campaigns, well compensated and fed for those arduous months following around those who would be king. They give us all the information (they and their publisher believe) we need to know before casting ballots for the most powerful elected candidate on Earth… that is, until AFTER the election when they produce behind-the-scenes tell-alls containing information that may have made a big difference to the American people BEFORE the election.

Not to be nitpicking, but that’s called double-dipping to those of us in the real world: getting paid to produce a product and getting paid again for new product that’s just product withheld from the public for reasons that can only be speculated. Then we get to see these people pimping their books on cable news and morning shows, promoting themselves as brilliant satirists or important whistleblowers whose observations are worthy of you shelling out your hard-earned dollars to supplement their generous salaries or federal pensions.

Imagine if the American people had to pay in order to receive the wisdom of the Founding Fathers and those words in the Declaration of Independence, United States Constitution, and Bill of Rights were only obtainable and shared from a coffee table before winding up on a bookshelf. You’d have to admit, those words (which we got for free) have a lot more staying power than anything written by a New York Times campaign embed, sanctimonious millionaire teleprompter reader, loudmouthed talk show host, or retired government employee who only spoke out after his or her twenty was safely in the can.

And don’t get me started on anyone who writes a book based on the two words that can generate instant interest: Donald Trump.

Make a hole on your coffee tables and some room on your bookshelves. It’s a long time before 2024.