2022 Midterms: Democrats May Well Manufacture Crises to Stay in Power

Democrats are historically prone to overreaching. They believe they know what’s best for those they’ve sworn to serve and demand they obey, by force if necessary. The Biden-green agenda has intentionally inflicted historic pain on the American people and voting thus far portends a November midterm election drubbing the likes unseen in modern times. They are also not known for admitting they and their policies are wrong and to do so at this time would seal their fate.

So, what are their very limited options seeing how much they love power and the lengths they would go to keep it?

Embrace the suck and seize power while they can. 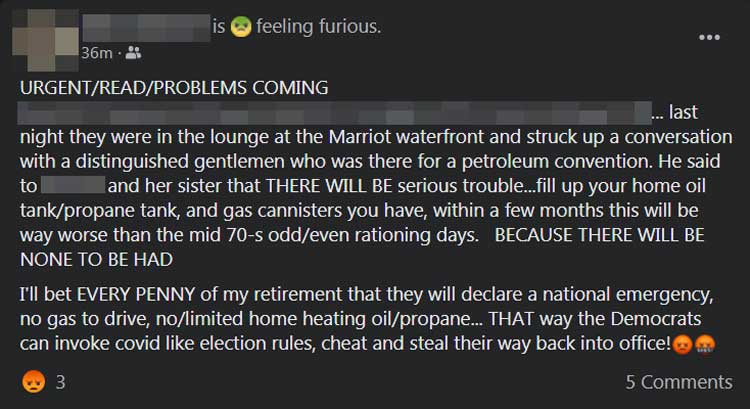 While those in the legacy and social medias would blow this off as “conspiracy theory”, remember almost everything they demand we ignore as falsehood has turned out to be true. We must also remember to not only watch what Democrats expect Americans to endure; look at what they conversely do to protect themselves.

We’ve already witnessed the breakdown of civility in major metropolitan centers and imagine when those smash-and-grabbers get hungry. We’ve also heard how freaked current officeholders can be when outside forces and/or misguided policies threaten their seats. 2022 is a referendum on fiscally reckless policies that have directly harmed the American people from an arrogant, tone deaf administration and party. Democrats currently in office know it, and for the most part, are fairly calm as if they know something we all don’t.

In his second ever solo White House press conference on Wednesday, US President Joe Biden was asked if November’s congressional elections would be legitimate if he could not pass his voting plans.

“It all depends on whether or not we’re able to make the case to the American people that some of this is being set up to try to alter the outcome of the election,” he said, referring to stricter voting rules enacted by Republican state houses. “I’m not saying it’s going to be legit,” Mr Biden said when asked about the possibility of fraud in the forthcoming elections that will decide the balance of power in Washington. “The increase in the prospect of being illegitimate is in direct proportion to us not being able to get these reforms passed,” the Democratic president continued.
— BBC, 1/20/22

Biden would never have made such an assertion unless he and his Democrats had doubts they would remain in power after November 8th so efforts are being made to create victims of those who’ll be counting the votes.

Maybe they won’t have to….

Despite the fact the term “martial law” doesn’t appear in the United States Constitution, it has been implemented over 60 times in the history of our nation, and for reasons more dire than to provide political cover for bad policy. But the Biden administration clearly has no respect for the American people so creating the atmosphere that could result in a suspension of an election is quite possible; a suspension that will be justified and promoted by a sycophantic, partisan legacy media.

If things start getting really ugly on the streets of America in September, watch out for discussions when gas rationing (a “next pandemic”?) could become a real possibility and how unfair such an environment could create for law-abiding taxpayers; especially those Democrats and RINOs are making a priority to disarm. An ability to get to the polls would be oh-so unfair to Democrat voters; as few of them as there may be, and all attempts will be made to preserve DEMocracy by all means necessary.