Like most who dared make bold predictions, we were off when it came to the Trump landslide. But we were spot on when it came to who on the Democrat side would be blamed should they get beat up during the 2020 election. The petulant freshmen weren’t held responsible by name but their radical agenda clearly hurt many Democrat incumbents.

Rep. Abigail Spanberger, a Democrat from Virginia who narrowly won a second term on Tuesday night, yelled out her frustration, accusing party leaders of bowing to demand from the liberals, like members of ‘The Squad.’

Spanberger was one Democrat who was losing big on Election Night and was miraculously spared by that timely, overnight deluge of convenient ballots.

During what was supposed to be a private conference call, she let it rip… off the record.

One would think, with all her “CIA” experience, Spanberger would know to be careful near any potential recording device, but sometimes arrogance clouds judgment. The audio was leaked to the Washington Post, who respectfully edited out her profanity. But why was this audio leaked to the public?

As details from the conference call emerged in the Twitter feeds of Capitol Hill reporters, lawmakers demanded the guilty leakers be found – information that was immediately leaked to the press. Rep. Hakeem Jeffries, a member of Democratic leadership, jumped into the call midway through to tell those on it to stop leaking. He also reminded them that reporters aren’t their friends, the Post noted.

There are 232 Democratic lawmakers and all of them could have been on the call, which is for all members of the party. Staff could have been listening too, which would make it harder to find the person or persons who were leaking.
— Daily Mail, 11/5/20

Obviously, Spanberger struck a nerve as she let the cat out of the bag while the fatally wounded issued their last gasps. 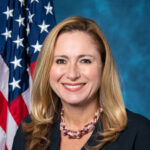 The call grew emotional at times as some members who lost their races spoke up, including Rep. Debbie Mucarsel-Powell of Florida, who started crying while urging Democrats to remain unified and not “tweet” attacks at one another. Others were clearly not appeased by Pelosi touting the wins for Democrats on Tuesday night — including Biden’s potential victory — saying that didn’t make up for the disappointment of missing a shot at taking over the Senate and losing at least half a dozen Democratic centrists in the House.
— Politico, 11/5/20

She WAS with the CIA….