During the four years of President Donald Trump’s term, the public witnessed numerous, unprecedented instances of indirect and direct obstruction from federal employees in almost every agency infected by liberal Democrats. These people went as far as making public displays of insubordination that would not be tolerated, that is, except in the most woke of today’s workplaces.

Some of these unelected federal employees deemed it their duty to derail the Constitutional mandate of their boss, who just happened to be the President of the United States, which when left to their own devices (and a sympathetic media) led to rumors and innuendo that distracted the Trump Administration for four years. Most of the false allegations, that led to two failed impeachments, either came from Democrat party operatives or disgruntled federal appointees and employees. This didn’t have to happen.

While it was of great controversy then, and to this day, the whole “elections have consequences” was played out for decades where the winner of a presidential election could literally clean house and fire as many federal employees as he wanted and replace them with people who were loyal to him and his agenda. This also opened things up for the expected “cronyism” and nepotism, but how different was that to what we currently have in a system where bad federal employees are almost impossible to fire?

After four years of direct insubordination by federal employees in almost every agency, Trump had enough and was going to make sure he could do a little disruption of his own at the start of his second term.

Less than two weeks before Election Day, Donald Trump signed an executive order that threatens to return the U.S. to a spoils system in which a large share of the federal government’s workforce could be fired for little or no reason – including a perceived lack of loyalty to the president.
— Professor Barry M. Mitnick, 1/21/21

“A perceived lack of loyalty to the president”… puh-leez.

I’m sure you can imagine the sheer horror and fear that flowed through the veins of entitled, overpaid, liberal Democrats in every federal agency, especially those who patted themselves on the back for their very visual four years of obstruction to the Trump agenda.

President Trump signs directive that would potentially pull thousands of federal employees in “policy-making” positions out of the competitive service, making them at-will employees.
— GovExec, 10/22/20

Fear was in the air.

The chutzpah of that ‘Stunning’ Executive Order Would Politicize Civil Service title IS “stunning” as if the actions of thousands of federal employees during Republican administrations (most notably Trump’s) were anything but politicized. Many reveled in their success, bragged during friendly media interviews and even anointed themselves as whistleblowers who took one for the team, resulting in even more unnecessary and expensive distractions for the president and the American people.

The “spoils” system, despite the impressions given, is NOT a new peril devised by a vengeful Donald Trump. It’s been around since the earliest presidents and has been a political football ever since. 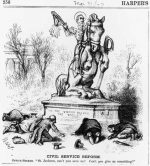 The peak of the spoils system came under James Buchanan, who served from 1857 to 1861. He replaced virtually every federal worker at the end of their “rotation.” William L. Marcy, who was secretary of state under Buchanan’s predecessor and was the first to refer to patronage as “spoils,” wrote in 1857 that civil servants from his administration were being “hunted down like wild beasts.”

Almost every Conservative working in the federal government knows what that feels like.

Even Abraham Lincoln, who followed Buchanan, made extensive use of the system, replacing at least 1,457 of the 1,639 officials then subject to presidential appointment. The number would have been higher but for the secession of Southern states, which put some federal officials out of his reach.

In 1870, President Ulysses S. Grant asked Congress to take action, complaining, “The present system does not secure the best men, and often not even fit men, for public place.” Congress responded with legislation that authorized the president to use executive orders to prescribe regulations for the civil service. That power exists today, most recently exercised in Trump’s own order.
— Professor Barry M. Mitnick, 1/21/21

The virtuous have always argued that the “spoils system” should always be based on merit and performance; NOT on politics. For the most part, Trump’s appointees were only as effective as those under allowed them to be. The fact that Republican federal employees still have to keep their values silent for fear of professional retribution shows just how badly the need for Schedule F to be deployed.

Employees at all the agencies analyzed, without exception, are sending their campaign contributions overwhelmingly to Clinton over her Republican counterpart. Several agencies, such as the State Department, which Clinton once led, saw more than 99 percent of contributions going to Clinton.
— The Hill, 10/26/16

The havoc created by unelected, federal employee ideologues during the Trump term was blatant and it didn’t take long for their loyalty to be rewarded.

President Joe Biden spent the first few days in office fulfilling his promise to Build Back Better for the American people, including his own workforce. Among a flurry of executive orders and memos to federal agencies were directives that directly affect work/life of federal workers. He repealed Trump’s Schedule F executive order which permitted the Trump administration to hire and fire federal employees for political reasons.

Since the presidential election, AFGE had called on the incoming Biden administration to undo Trump’s harmful executive orders. We thank the President for taking swift and decisive action to protect the federal workforce.
— American Federation of Government Employees (AFGE), 1/25/21

While some on the left are slowly catching up, they’re expectedly and falsely portraying Schedule F as this new “radical” scheme.

A radical plan for Trump’s second term
Former President Trump’s top allies are preparing to radically reshape the federal government if he is re-elected, purging potentially thousands of civil servants and filling career posts with loyalists to him and his “America First” ideology, people involved in the discussions tell Axios.
— Axios, 7/22/22

Let’s hope in 2025 when Donald Trump is sworn in for his next term, one of his first acts is the issuance of thousands of pink slips to the fat-and-perpetually miserable federal employees who were active insubordinates then and who be even more determined if they were to get “four more years”.