If Republicans Take the Senate, John Kennedy Should Be Leader

Granted, he was once a Democrat but we all make mistakes. Some of us learn from mistakes and articulates Republican values far better than some of the establishment hacks representing us now.

Of all of the senators on Capitol Hill, there’s one who’s never burned us or made us have to defend his words or actions. Of all the senators on Capitol Hill, there is one who comes off at times as aloof, but that’s usually before he respectfully goes for the intellectual jugular. And for obvious reasons, Senator Mitch McConnell should be no where near leadership if Republicans become the majority in the Senate or not.

Republicans and America needs someone whose word can be trusted and can communicate in a manner that is disarming, yet informative and true. The United States Senate needs a leader and America could use a teacher.

The next Republican Leader should be Senator John Kennedy of Louisiana.

Prior to his election to the Senate, Sen. Kennedy served as state treasurer of Louisiana for five terms. As treasurer, he oversaw the state’s multi-billion dollar investment portfolios. He also oversaw local and state bond issues and returned millions of dollars in unclaimed property each year.

Sen. Kennedy served as secretary of the Department of Revenue, special counsel to Gov. Roemer and secretary of Gov. Roemer’s cabinet. He was also an attorney and partner in the Baton Rouge and New Orleans law firm of Chaffe McCall. 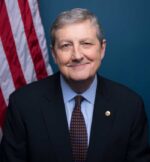 Sen. Kennedy served as an adjunct professor at Louisiana State University’s Paul M. Hebert Law Center from 2002 to 2016. He regularly volunteers as a substitute teacher in Louisiana public schools. He resides in Madisonville, Louisiana, with his wife Becky and their dogs, Charlie and Jack. The Kennedys are founding members of their local Methodist church.
— US Senate biography

We’ll see what happens after the midterm election….