Rush Limbaugh once said he “learned the game that sports media is all about,” is the “single most animating aspect of our culture, of our society that impassioned the sports media, is race.”

While Massachusetts is home to many fine people, Metropolitan Boston has a history thus reputation. It’s an ugly one, a racist one, a liberal Democrat one, and seeing how the sports media is predominantly liberal, this comes as no surprise.

New England Patriots fans got a whole heaping serving of Cam Newton hate last season from the Boston sports media; in particular the New England Patriots’ own post game show hosted by a conglomeration of out-of-shape blabbah-mouths you’d most likely hear commiserating in a Southie bar during the 70’s and whose comments are almost always preceded with “I think” or “I want to see…”.

Despite all of the challenges Cam Newton absorbed last season, the criticism was merciless. With the addition of 2021 first round draft choice Mac Jones, all knives are really out for Cam as the media sees an heir apparent who looks like them on the horizon; a horizon they can’t get to fast enough considering all they need do is run over a black man to get there. 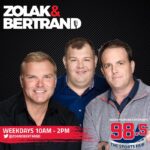 This time on 98.5 “The Sports Hub (where Cam hate is the ongoing norm), former Patriots QB Scott Zolak may have finally gone too far….

Many Patriots fans live by the slogan, “In Belichick We Trust” and if the coach believed rap music was a distraction, it would have been nixed years ago.

It’s sad that the sports media is populated by (with a few exceptions) the clearly un-athletic and their need for attention has rendered them reckless and looking the fool.

The 53-year-old former signal-caller then said it’s a stark difference when compared to Patriots backup QB Mac Jones, who he said “looks like he came to work again.” But, Cam has noted Jones has a similar love for the music … explaining last month he was “surprised” by Mac’s knowledge of rap. 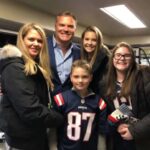 Let’s hope Scott doesn’t react like one of his daughters just brought home a black boyfriend.

While Coach Belichick is evaluating both Newton and Jones to see which player gives the team the best opportunity to win, Zolak may have just backed him into a corner with what was clearly a racist comment meant to justify his personal opinion.

Boston’s reputation for liberal racism means this is an event that was inevitable.

Scott Zolak’s ugly criticisms of Cam Newton for listening to rap music during practice are downright absurd. They also reinforce the age-old notion that Boston is an unwelcoming place for Black athletes. 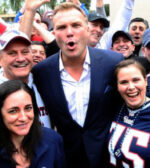 Episodes like these are why Boston can’t shed its label as a racist sports town, even as we insist the landscape has changed. This is not ancient history. Within the last five years alone, we’ve had Adam Jones, DeMarcus Cousins and scores of Black baseball players talk about their encounters with racism at Fenway. CC Sabathia says it’s the only place he’s ever been called the N-word; Torii Hunter says he requested a no-trade clause to the Red Sox because of his experiences. When Kyrie Irving suggested he may face racial taunts in Boston, what happened when Irving came to Boston? A fan threw a water bottle in his direction. We can argue how one dumb teenager doesn’t represent an entire city, or explain that Celtics fans loathe Irving because he quit on the team — and not his skin color.

But the other side always has a viable counter. Now, they have another one: Scott Zolak.
— WEEI, 8/28/21

Zolak will get the exact type of reaction a local host of such a style desires. While there will be a bunch of public criticism, the commentary will be appreciated by a very specific audience. There tends to be a method to the madness.
— MSN, 8/27/21

That “very specific audience” showed up for the Patriots’ first preseason game.

Whether it was the planned longshots of fans giving Mac Jones a standing ovation when he took the field during his first NFL game and the cameras panned the stadium, or now this, it’s also unfortunate the position Jones has been thrust into. Zolak’s big mouth may have inadvertently cost him any chance to be the starting quarterback on Week 1 because of unnecessary public relations fallout. Despite that. if you consume any Boston sports media, the Mac Jones lobbying continues unabated.

Should Cam Newton be named the starting quarterback for the New England Patriots and he performs well, the bloated may actually start rooting for the team to lose so Mac Jones will get the job and they can boast they were right all along. That appears to be what’s most important despite the fact that while the Patriots were loading up with high-priced talent during the off season, almost all chose to come to New England to play for Coach Belichick and with Newton as QB.

Not sure how many players ever publicly stated they wanted to come to a team to play with Scott Zolak.

As far as his comments, the world outside Boston is taking notice and it’s not pretty.

Others suggested that maybe Zolak’s career stats would have been better if he’d listened to rap music.
— Atlanta Black Star, 8/27/21

In all seriousness, Zolak, as a high-profile analyst and at least secondary member of the team’s official media staff, needs to pull his head out, realize the weight of what he’s insinuating here, and make a very quick backpedal and apology. I’m not advocating that Zolak lose any jobs or responsibilities over this. This is not “cancel culture.” The Patriots’ organization, and the other organizations that pay Zolak to provide analysis will or will not continue to make that call based on a number of factors. But this entire sequence is wrong, and it’s dangerously bad “analysis” at a time when we’re all supposed to be a lot smarter about these things.
— USA Today Sports, 8/27/21

I’m not a mathematician, but we don’t need to be to see that Newton’s single-season totals dwarf what Zolak produced his entire career. It’s not that an inferior player has no place criticizing one who is more gifted and accomplished, but if you are going to go that route, you’ve got to come with something better than this, Scott.
— Heavy, 8/27/21

You know Scott Zolak? Pittsburgh guy. Former Patriots quarterback from the 1990s. He does the color commentary for the New England radio broadcasts and two years ago accused the Eagles of pumping in fake crowd noise at Lincoln Financial Field. Keep in mind, the New England radio dudes don’t seem to like Newton very much. In the past, they’ve complained about him dabbing, and one guy was close to tears when they brought him back this season. Zolak’s take seems to fall in line with Felger, Mazz, and the other doofuses up there.
— Crossing Board, 8/27/21

It wasn’t the first time Zolak melted down over Newton. He called him “absolutely putrid” and openly called for his benching during a game broadcast last year.

Former Patriots QB (!!) Scott Zolak, a man who is prone to sticking his foot in his mouth on almost a daily basis, claimed that Newton is not the right man for the job because of his … love for hip hop?

Zolak has never been a fan of Newton, and he’s clearly trying to stir up even more interest for ditching him in favor of Jones. Newton has been dealing with doubters mocking his flashy style of play and penchant for celebrating in elaborate fashion for years now, and Zolak is just another hater to add to the pile. It’s hard to fathom Belichick considering taste in tunes as one of the factors that help him pick a starting quarterback. Newton may very well lose this competition to Jones, but Zolak insisting that some dancing in between plays is the reason why Newton is unqualified to start is … asinine.
— Fansided, 8/27/21

So a 53-year-old white man in Boston has a problem with a local team’s most prominent Black player picking tunes that he likes. The point is that we need to stop giving oxygen to stuff like this. In addition to the not-subtle racial overtones, it’s flatly stupid.

Do you think that Zolak would have any problem with it if Newton wanted to hear some classic rock during practice? Zolak, after all, is the guy who got the Patriots to start playing “Your Love” by The Outfield during the fourth quarter of games in Foxboro. No, the problem isn’t “the music,” the problem is “the rap music.” And also the man doing the dancing, because, yeah, Tom Brady was a dancer himself.
— Deadspin, 8/27/21

Rap/R&B playing over a loudspeaker during a Patriots’ practice obviously was routine and it didn’t appear to bother Scott Zolak then.

Newton has been criticized for celebrating in the end zones and the way he handled the Carolina Panthers’ Super Bowl 50 loss to the Denver Broncos, but his choice of music appears to be a first. Newton and Jones are in the midst of a quarterback competition. It probably won’t come down to who listens to the least rap music.
— WCSI, 8/27/21

We’ve seen plenty of awful football takes in the past, but the latest remarks from Scott Zolak might just take the cake. At the end of the day, Newton’s taste in music has no effect on whether or not he plays well. As for Zolak, he’ll eventually have to explain why he felt the need to make this comment about Newton.
— The Spun, 8/27/21

With the shift, every Black quarterback is watched under a microscope and criticized for just about anything. One QB who has always dealt with the repercussions of this is Cam Newton. No matter what Cam does, it upsets people and rubs them the wrong way. From the way he dresses to his victory dances, it just makes the racism flare-up.

According to TMZ, recently, former New England QB Scott Zolak decided to publicly offer his opinion on Cam with just enough dog whistles to show us we still have a ways to go.
— Bossip, 8/27/21

I’m not calling for Scott Zolak to be fired because I really don’t think it will happen. As of the late night hours of August 27th and you go to any of Boston’s local news channel’s websites, the Scott Zolak story is nowhere to be seen and 98.5 The Sports Hub (where this whole episode began) is all-in on pro-Mac, anti-Cam. What does that tell ya? They can’t blame it on a Fenway drunk or Celtic fan with a water bottle. Zolak is one of them, one of the media, and they probably feel they same way he does but would never say it on the air.

It can’t be fun having the “Patriots All Access” television program now having to scramble to find a temp co-host for the show, having to address Zolak’s commentary, and decide if he’ll be back after an adequate time out because you know the Patriots’ players are well aware of this.

So, stand by for Scott’s “That’s not who I am” liberal standard punchline when they get publicly busted and a career may be on the line.

Then again, a white man losing his job for racially insulting a black man in Boston… seriously?

BTW — ESPN’s Dan Orlovsky is pushed as this knowledgeable pundit, consistently dissing Cam Newton in favor of Jimmy G. and now Mac Jones. Like Zolak, Orlovsky is no one to judge anyone considering how mediocre a QB he was as well.