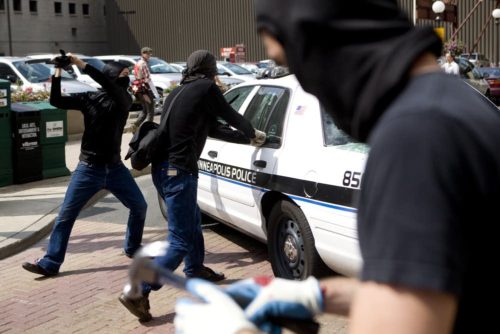 The media reciters claim the Tea Party people are the sole instigators of political hate in America. Let’s leave out the fact that I don’t recall seeing any reports of arrests from disturbances of any kind (except for the one reported arrest of a person who said something to a member of the Congressional Black Caucus and was promptly released), yet whenever there is a political convention or a meeting of an international monetary body, there are dozens of arrests as progressive and anarchist protesters customarily destroy millions of dollars of public and private property.

But we are to believe only the right hates.

Besides the examples of routine liberal racist hate comments found on my YouTube channel, comments if a Congressional Black Caucus member received would result in calls to the FBI, here are just a few samples of violence committed over the recent years by those tolerant, compassionate progressives…

October 1999
Liberals at California State University at Sacramento stole 3,000 copies of the student newspaper.
They were enraged because the paper, The State Hornet, had published the picture of a Hispanic man being arrested and charged with resisting arrest at a football game.

And this is just a sample.

Over the years, one can only find less than a handful of violent acts performed by conservatives and/or Republicans for no other reason than they know better.

Liberals are the last people to be lecturing anyone about political violence.