Nonprofits are always looking for donors. Nonprofits will exploit events for dollars. This happens on the left and the right. This becomes problematic when a nonprofit exploits and co-opts a movement, declares themselves a “leader” of said movement, and proclaims themselves spokespersons for millions.

Most recently, Tea Party Patriots is offering an online “letter” that will be sent to President Trump on how and when he should re-open the United States economy after the Coronavirus pandemic. 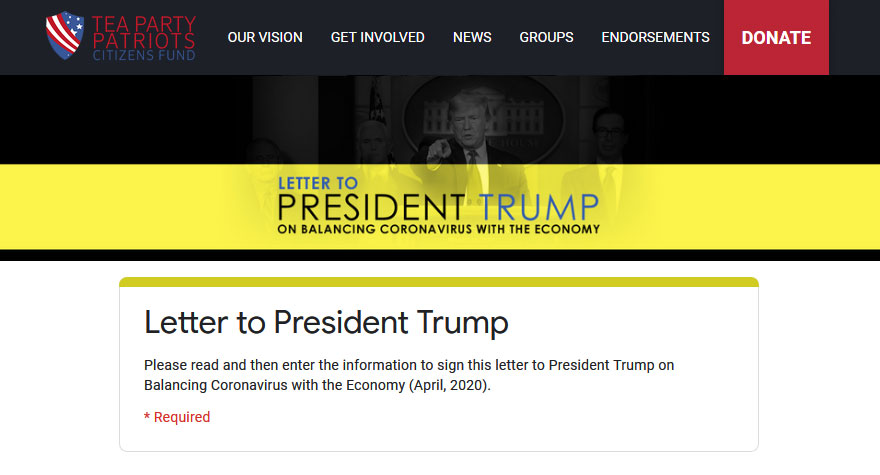 Unlike a lot of petitions that just require the signer submit their email address, the Tea Party Patriots form also requests the signer’s physical address, phone number and if that signer would like future email updates. There is no direct solicitation for a donation, but that’s surely to come. What makes the Tea Party Patriots similar to other so-called conservative nonprofits is its being led by someone who portrays herself as a staunch supporter of President Trump.

The problem is that was not always the case….

How could conservative leader Jenny Beth Martin, preaching “consistency”, ever support someone like Donald Trump after what she said in front of the world in 2016?

Granted that was a unique election cycle but once the Republican nomination cycle was settled, that whole thing about rallying around out nominee should have gone into traditional effect. But too many unelected “leaders” declined to support Donald Trump, in some cases right up until Election Night, but since have declared themselves champions of the president and dictate to us when we need to ramp up that support.

Donald J. Trump has proven to be one of the most conservative presidents in our nation’s history and has withstood daily political and media attacks that would have sent many of these unelected leaders to a doctor’s office for stress reduction medication before curling up in a fetal position.

To date, few if any of our unelected leaders have issued a very public apology for the electoral damage they did to candidate Trump in 2016. Hillary Clinton and her supporters continue to ignorantly assert she really won the election because she won the popular vote by 2,868,686 votes. Imagine how many more votes Donald Trump might have earned had sore-loser, Cruzers sincerely rallied around the nominee instead of continuing to pummel him after the Republican convention formalities just because he didn’t meet their lofty definition of who is a conservative.

More frustrating are those so-called conservatives who did everything they could to derail Donald Trump’s campaign and were later absorbed into the administration. 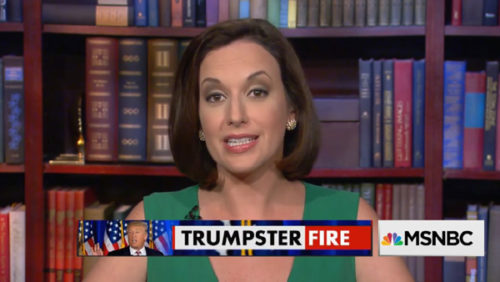 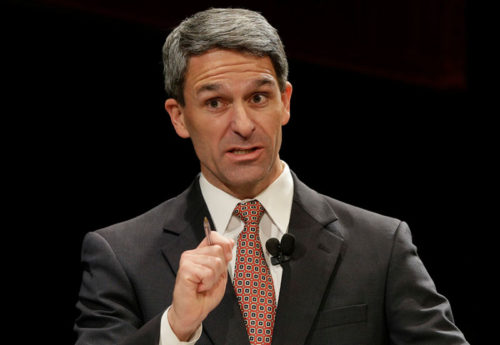 The irony of the Tea Party Patriots “letter” to President Trump is who they claim to represent.

We, the undersigned, are job creators and job seekers. We are employers and employees. We are parents and grandparents concerned about the economic impact of this shutdown. We are struggling small business owners; managers who have recently laid off valuable staff or are fearful we may have to lay off our employees. We are innovators and inventors. Above all, we are Americans. And we know America can, and will, survive this economic interruption, with your guidance and leadership.
— Tea Party Patriots letter to President Trump

Nonprofits seldom “create” anything physical to sell like “job creators”. All they appear to do is utilize one tool God gave them: the mouth. As of their latest available IRS filing, the only “employees” they have are a select few and when you look at how much they bring in from donations from hard-working Americans and retirees, how much they pay themselves compared to the bang-for-the-buck, eyebrows should appropriately be raised.

If Jenny Beth Martin wants to borrow the “trust but verify” line from President Ronald Reagan, let’s go there. 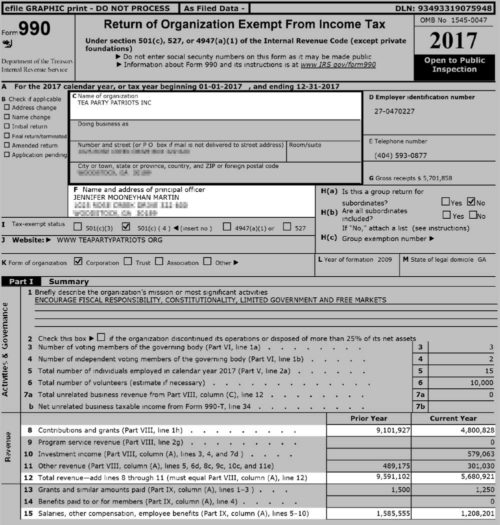 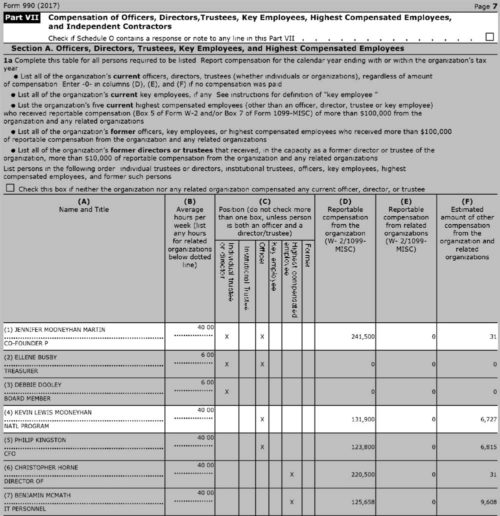 Nonprofits need to raise money. We get that.

Opportunism is NOT a “conservative” trait and when unelected leaders speak for us and demand our loyalty via donor dollars, they should be consistent when it comes to loyalty.

Jenny Beth Martin of Tea Party Patriots became a staunch supporter of President Trump despite the disunity she and others fostered through most of 2015 and 2016. She and others still have yet to acknowledge the error of their actions during that historic process, still have the nerve to tell all of us when and how to ramp up support for the president and it always appears to come back to being all about them. 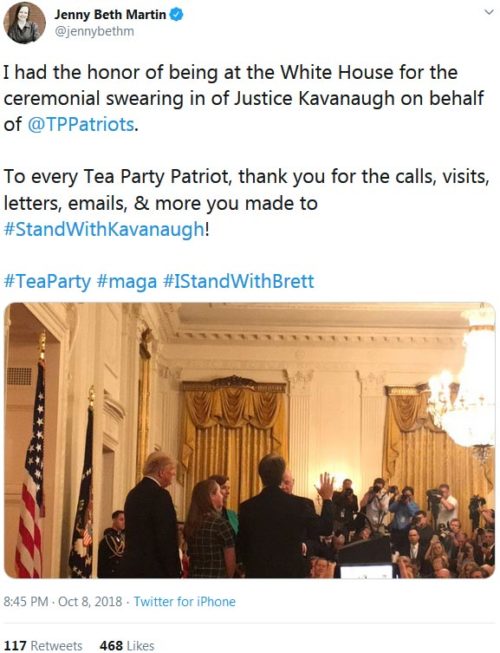 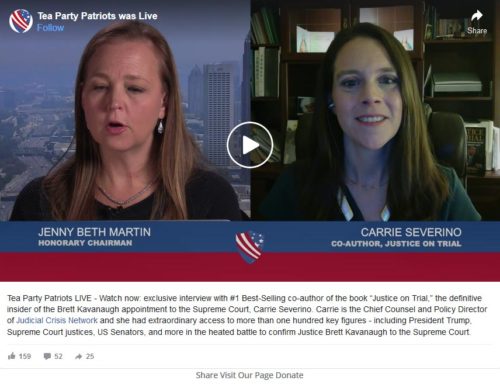 President Trump doesn’t need to have a stack of letters delivered to the White House for a photo op and we all know that’s where this is going. One thing that appears to be consistent is Jenny Beth Martin’s Tea Party Patriots having a well-documented history of NOT putting donor money where their mouths are.

When the Tea Party Patriots threw its support last month behind Matt Bevin, the underdog conservative challenger trying to unseat top Senate Republican Mitch McConnell, President Jenny Beth Martin vowed the group would be “putting our money where our mouth is.”

So far, its super PAC has mustered just $56,000 worth of mailers in Kentucky on Bevin’s behalf — less than half the amount it has paid Martin in consulting fees since July.
— Washington Post, 4/26/14

Nonprofit exploitation of current events will happen, whether we’re talking the Tea Party Patriots, MoveOn.org or the Red Cross. The difference is most nonprofits don’t attempt to take credit for things they vehemently opposed, and later fundraise off it. It could be argued that the Tea Party Movement would have evolved to be an even more potent force as it was originally a collection of Republicans, Democrats and independents who were “taxed enough already”. When the liberal media labeled the Tea Party as “conservative” which was certified after opportunists co-opted that coalition of fed up Americans for their own self interests, conservatives became involuntarily linked with the words and actions of those opportunists.

The United States will recover from this recent challenge. We always do, despite the roadblocks erected by friend and foe.