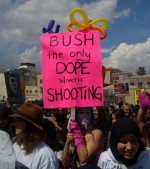 In an ongoing effort to deflect attention away from the possible inspirations of the Arizona shooter, the left has yet again presented a coordinated accusation towards Sarah Palin, conservative talk radio, and the Tea Party. However I can’t recall one instance to date where it’s been determined someone on right has committed a violent act inspired by a conservative pundit.

But why let reality spoil a good liberal talking point?

Over the years, however, we’ve seen political violence and it’s almost always committed by young people on the left. Whether we’re talking demonstrations at political party conventions, World Trade Organization and/or G8 summits, we usually see the same types congregate: young people in bandanas or skull caps covering their faces who routinely destroy public and private property under the guise of their right to assemble and speak freely.

While no organized Tea Party event has resulted in mass arrests and property damage, it’s the right that’s been smeared as the violent “crazies”. But why are young people so prone to political violence and who’s putting them up to it? The very people who aren’t dumb enough to be present at a political rally where damage and arrests may occur: the radical professoriate.

Granted, Glenn Beck and Sarah Palin can reach a large audience, but when they (or their message) become annoying you can change the channel. You can walk with no repercussions. Young people don’t have those options when sitting in front of a liberal teacher who either tells his them Bush’s “tones” was like Hitler’s or people trapped in the burning Twin Towers are “little Eichmanns” who basically had the horrific death coming.

We have young people who curiously go from politically-ignorant one summer to hardcore activists who put themselves between Israeli Army bulldozers and Hamas hideouts. Is this the normal thinking of a young person or were they worked up into a frenzy by a teacher that more than has the common sense to place their own bodies between construction equipment and buildings?

We now have politicians who want to make it illegal for a private citizen to threaten a lawmaker (which I thought it already was), yet it was okay for then-Senator Barack Obama to tell his millions of young followers to crash the sites of those who opposed him, “push back” and get in our faces.

I would consider that violent speech considering what would happen to me if I attempted to “push back” or get in the face of the president. Personally, I can’t recall an instance where a conservative told his or her followers to flood the sites of opposition while they routinely do that to ours.

Sarah Palin’s website was hacked by the punk son of a state legislator and it’s easy to understand why the left sought leniency for him. He was probably indoctrinated by the same liberal academics who teach the virtues of civil disobedience and “by any means necessary”. While still under some kind of investigation, I think we’ll one day find that the young people behind the shutdown of corporate websites hostile to WikiLeaks and Julian Assange are probably college students whose grades (thus their futures) were dependent on staying in the good graces of professors who can be quite vindictive towards those who stray off message.

While the ratio of conservative-to-liberal teachers is very low, the instances of students documenting abuse by conservatives is almost non-existent, but we routinely see press reports of students who sat through America-hating, Bush and Republican-bashing, socialism-praising presentations by professors who believe that starting the day off with a good breakfast is only second to reading the New York Times.

So it’s not surprising that a good number of young people see above-it-all Jon Stewart as a real newsman and can recite liberal talking points ad nauseum. It’s also not surprising to see just how angry and vile they can get when presented with a view they don’t agree with or lack the intellectual ammunition to rebut. They resort to disrespect, profanity and if they weren’t hiding behind online anonymity, perhaps violence.

So let’s not get all shocked when young people commit horrendous acts of violence and destruction. Whether we’re talking about Jared Loughners or the Earth Liberation Front, we’re dealing with people who are acting on what they were taught; not by Glenn Beck or Sarah Palin but by heartless, radical progressive teachers who eagerly offer up sacrificial students who come and go yearly.

The media has never looked at who indoctrinates young people to disrupt political gatherings (on both sides) or infiltrate web forums with the primary intent of insulting those whose views differ with theirs. But take a good look at who shoots up campuses and supermarkets. We’re not talking about older people with subscriptions to Beck and Limbaugh. We’re talking about the youth who are later found to be college educated with the “Communist Manifesto” and “Earth in the Balance” on their bookshelves.

Take a look at the radical professors and see who’s really placing the bulleyes on their opposition.