Rudin-Pascal: Hollywood Is More Racist Than You Know

While in the industry in Hollywood, I had the opportunity to talk to many blacks who experienced direct and indirect racism and it was something that was routinely blown off. No one says nothin’ because it’s better to take it and keep working instead of saying something and, “You’ll never work in this town again”, which is why there are so few whistleblowers in Hollywood.

When it comes to the recent hack of Sony’s computer network, the leaked emails that the victims (and some in the media) are denouncing because they’re targeting their fellow elite, it’s more of a window into the accepted racism many proudly express in private.

Hollywood film producer Scott Rudin and Sony Pictures Chair Amy Pascal have been further embarrassed by leaked emails released as a result of the Sony hack, this time mocking President Barack Obama in a set of racist email exchanges.

On the eve of a fundraising breakfast being attended by the President at the home of DreamWorks CEO Jeffrey Katzenberg, Pascal and Rudin went over things she could discuss with Obama while at the event in October 2013.

‘Should I ask him if he liked DJANGO?’ Pascal asks Rudin, a reference to the 2012 Quentin Tarantino film “Django Unchained” that dealt with the subject of slavery in the antebellum South. “12 years,” responds Rudin, referencing another slavery film, this time Steve McQueen’s 2013 Academy Award-winning work “12 Years a Slave”, a very violent and brutal look at the injustice and abuse endured by the millions forced into slavery in America.

The pair then keep going, listing as many current films starring black actors as they can name, including Lee Daniels’ “The Butler” and two Kevin Hart movies, “Think Like a Man” and “Ride Along”.

‘I bet he likes Kevin Hart,’ says Rudin at one point.

Liberals are the first to go off publicly if a Republican disses the president, but progressives do worse with an apparent regularity that should not be dismissed by your garden variety apology (only issued because they were caught). 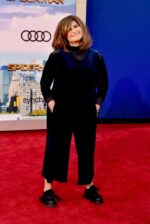 The content of my emails were insensitive and inappropriate but are not an accurate reflection of who I am.
— Sony Pictures co-chairman Amy Pascal

It’s clear Pascal and Rudin lack respect for any black man, let alone one who just happens to be the President of the United States. To be fair, I know they’re not alone. Just look at how little coverage this aspect of the story is being given in comparison had such a dialogue occurred amongst Republicans.