Stacey Dash and the Uncomfortable Truth

“Conservative darling” Stacey Dash has been in the news lately because of a “failed attempt at humor” she made about rape victims. When we shared a Washington Times piece on the faux pas; one of many pieces issued by many publications and online sources, our Facebook post drew the ire of many who criticized the “viciousness” of our “attack” on her. 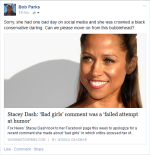 One question we asked during the thread: “And who’s defining the “conservative woman”? “Conservative” men?”

Let’s look at the conservative embrace of Dash.

Prior to the 2012 election, she sent out a Tweet expressing her support of Republican presidential candidate Mitt Romney. Now, Bob was blacklisted in Hollywood because he naively and publicly told friends of changing his party registration from Democrat-to-Republican, so we fully understand the blow-back from the intolerant left and the ramifications. But prior to the very public attacks, how many people even knew what a Stacey Dash was?

Let’s be real, Dash was embraced for one reason: she is black, voted Republican, and that was used to deflect the whole Republicans-are-racist recitation. “Used” is the operative and uncomfortable word.

But who defines what it is to be a “conservative woman”? Prior to 2008, conservative women were presented as professional and intelligent, thus worthy of respect.

Then came Sarah Palin and what did the liberal media occupy their minds with in order to discredit her?

Ever since, conservative men have exploited women, not on what they bring to the table, but what was under it and many women were willing to comply.

Post-2008, we got Megyn Kelly and the “glass desk”. Of course, conservatives would NEVER celebrate and/or exploit women because of their assets, right? Certainly, so-called conservative men would never even go so far as to create a music video about how pretty they are, right?

And just so you know we’re not being hypocritical, Bob took jabs at the “leg cam” concept over five years ago when it was clear what Fox News was doing for ratings….

We understand why conservative men now come a-runnin’ to the defense of any conservative woman under attack from the left, or right.

Of course, since women know what they ol’ boys club is looking (at) for, it’s no wonder that we now see “Christian”, “conservative” women presenting themselves on social media with a gun and a little more skin. Sorry, that’s hardly in harmony with the whole “family values” dynamic.

Back to last night’s Facebook debate: we asked if these same conservatives would be running to the defense of Stacey Dash if she looked like Candy Crowley? Another criticism received was that we were judging Stacey Dash. It wasn’t judging but merely asking what she’s contributed to the movement. If daring to ask such a question is judgmental then stop vetting our candidates as we clearly lack any of those previously-advertised standards and morals.

Yes, we question conservatives who have thrust Stacey Dash to spokesperson status. If you, like one of last night’s participants, want to call Bob a small and petty man who is jealous of her prominence and has nowhere near the reach she has, we’re okay with that. We asked what she’s done for the movement and our overall level of involvement was called into question. Again, we’re okay with that.

But let’s say in a previous life we had questionable activities available online. We understand your past can come back to haunt. Just ask Vanessa Williams how that works. But it’s what you do after your embrace of conservatism that defines whether you’re just milking the movement for the rewards or are the “Real” deal. One could argue that Stacey Dash is a ticking time bomb every time she’s presented as a “conservative” because what she says and does will be revisited by the left when the time is right.

If they’re being consistent, we eagerly await the embrace of Howard Stern to the conservative movement. He was one of many to publicly expose the ignorance of the Obama voter and has also said, “I will never vote Democrat again, they are Communists.” Surely that alone is enough to make him a “conservative darling”; it’s not all about T&A, right? 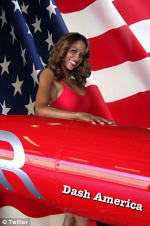 We’re convinced Dash’s initial, public support of Mitt Romney was a career move, publicity stunt to garner the attention of conservative males, in particular, and they took the bait. On second thought, she may be smarter than we give her credit for as she went where the money is and is cashin’ in.

‘Vote for Romney. The only choice for your future,’ she tweeted on Sunday, posting a steamy photo of herself dressed in a sexy red top in front of an American flag.

Black conservatives are showcased by the conservative establishment to highlight the diversity, and that’s not a bad thing. Black conservatives who are willing to sell their souls for the fame and fortune; more power to ya. However, be wary of what happens if your work is too good.

But enough of the chivalry of running to a “conservative” woman’s defense. If a woman deserves her prominence, she can defend herself.

Even better, she won’t put herself in that uncomfortable position in the first place.