Stacey Dash, Joy Villa, Candace Owens, the list is long regarding those who decided conservatives were suckers with loose wallets and a media who takes the bait without the simplest of vetting.

The latest example is “hero” Lt. Col. Stuart Scheller who called out the incompetence of the Pentagon hierarchy on the deadly botched Afghanistan “withdrawal”. He knew making his disagreement public on social media was a career death sentence, but clearly knowing how conservatives love a “patriot”, he did so and the results were predictable and loud.

There are dozens of others.

After mentions of his plight were trumpeted on Fox News, conservative talk radio and media, a fundraiser was created and over $2 million dollars has been raised to-date for his defense, retirement, etc. 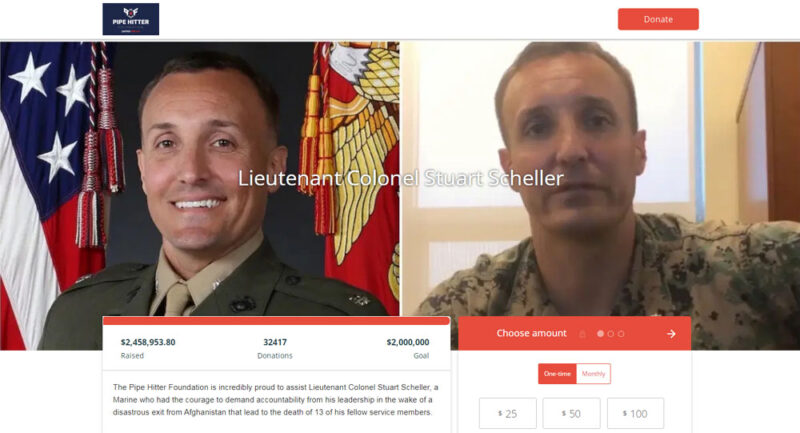 But like Owens, Scheller had social media posts he obviously knew wouldn’t be helpful when it comes to the sympathy and generosity of conservatives. 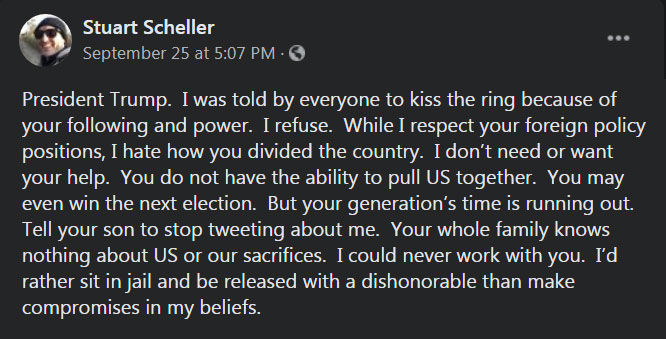 A response was obviously necessary. 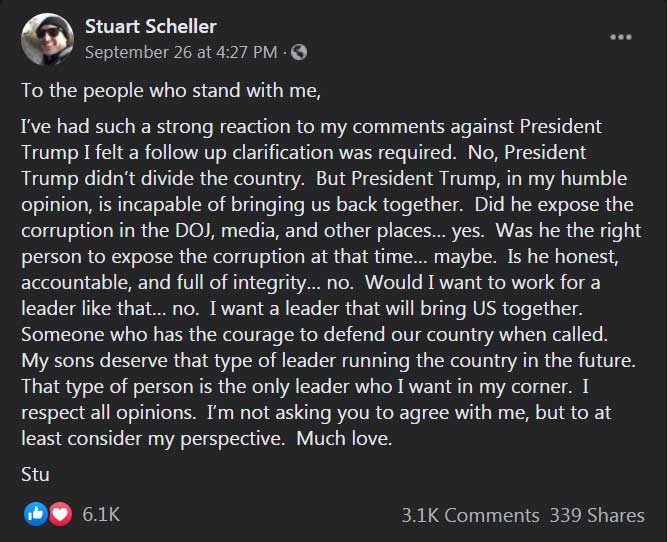 It could be argued had Tucker Carlson and others known and shared portions of the Facebook posts to their audiences, Scheller may not have the $2 million-and-counting waiting for him upon his release.

The problem remains that those in the conservative media (like their liberal counterparts) NEVER admit when they were not only wrong, but led millions to support those not worthy. For example, too many who demand we support Donald Trump were viciously against him during the 2016 campaign and (with the recent exception of Glenn Beck) have yet to admit they were wrong about him and his agenda.

Many of us bought the hype and initially saw Lt. Col. Stuart Scheller as a hero. While those of us who served are well aware of the UCMJ rules and know the First Amendment technically doesn’t exist for unit cohesion reasons and also served at a time when social media didn’t exist so those complications never had to be addressed, Scheller’s actions were not the smartest. It could be speculated that Scheller would have rightly busted any enlisted subordinate who did the same thing he did.

Conservatives admired his passion and commitment to those who lost their lives during the last days in Afghanistan, but it now appears Scheller deleted Facebook posts as to make himself more sympathetic to a preferred MAGA demographic; one that would turn honor into sympathy and ultimately, dollars.

It’s sad we have to dissect the possibly motivations of those who just appear out of nowhere but until conservatives do, we might as well tape a piece of paper on our backs with a big “sucker” written on it. And sadly, this also appears to be another example of how the officer class takes care of their own assuring a soft landing when their time of service comes to an end.

Obviously news of Lt. Col. Scheller’s anti-Trump Facebook posts being shared among Trump supporters, presumably the majority of those donating to his fundraiser, may have resulted in a down-tick.

The “that’s-not-who-I-am” defense, most notably used after embarrassing actions are made public, doesn’t always play well. We’ll see if another fooled by the media is successful in profiting off a president and movement he clearly had no respect for.