Many of us know to be very careful and to check whenever you share anything off social media. Dates could be wrong, facts could be off, etc. Then again, we’re to believe that whenever you cite a person from what-used-to-be-considered credible journalistic sources, it’s accurate.

Mix in the arrogance of the professional journalism class, a little simple mathematics and you get the comic relief issued on MSNBC’s The 11th Hour with Brian Williams.

“True” and “disturbing” is pretty close to the mark here.

Let’s try and keep this simple for the “journalists”. Three hundred twenty-seven million people given $1 each equals $327 million.

Had Williams and Gay gotten that through their numerically-challenged heads immediately after reading Rivas’ Tweet, the segment would not have gone so south, so quickly. Three hundred twenty-seven million people given $1 million each would require Mike Bloomberg to have at least $327 trillion in the bank.

We all know about the credibility challenges rightfully sticking to Brian Williams, so moving right along….

Mekita Rivas boasts of being a writer for Refinery29, Yahoo News UK, Yahoo Lifestyle, Teen Vogue, The Washington Post, Chicago Tribune, Sydney Morning Herald, Broadly, GARAGE Magazine, CNBC, Eventbrite Rally, The (Toronto) Star and other blogs. Williams’ on-air guest Mara Gay is a member of the New York Times editorial board and also wrote for The New York Times, The Wall Street Journal, The Atlantic, New York Daily News, MarketWatch, New York Magazine, The Dallas Morning News, Fox Business, RealClearPolitics, Pulse Nigeria, Salt Lake Tribune. One would think these women would appreciate the gravity of what they put out on social media or say on national television, no matter how small the audience.

Rivas has since protected her Twitter account AND her website because she appears to be one of those arrogant, thin skinned bloggers who can dish it but retreats when self-inflicted public stupidity smacks her back in the face. 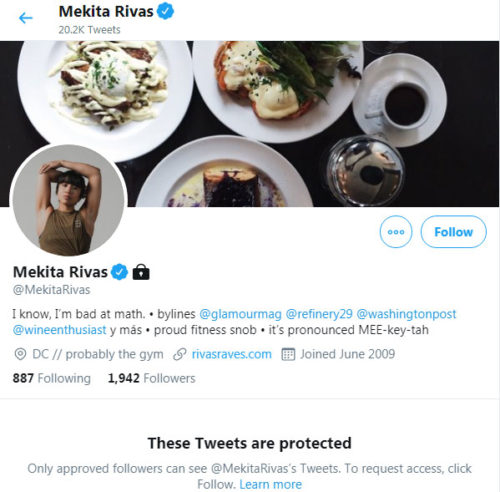 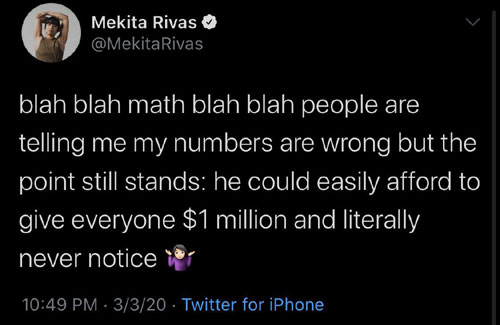 Of course, one of Rivas’ colleagues rushed to the defense of the narcissistic butthurt.

Remember this when the media trashes President Trump, claims he lies and/or misrepresents facts. As a successful businessman, he’s obviously mastered rather simple math, unlike his college-educated critics.

When today’s journalists get it wrong, especially the younger ones, there are seldom apologies and/or sincere contrition. We’re supposed to understand what they meant, no matter how badly they mangle the obvious.