They go on television, at times as some kind of authority, yet constantly return to their “I don’t understand” why so many just don’t think like THEY do….

Field’s ignorance of why we have an Electoral College is startlingly arrogant, not to mention her liberal recitation that it was created to water down the “three-fifths clause” and diminish the power of the Democrat slave-owning states. 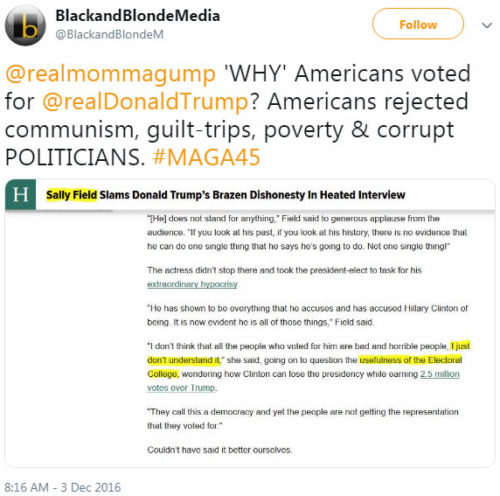 Sally Field needs also remember that when Hillary Clinton believed she would win, she lectured us all how we should respect the election process, including the Electoral College; a system created by the Founding Fathers as a check on placing an unqualified person in the presidency as well as assure politicians would not ignore the nation as a whole in favor of large urban areas (which is exactly what the failed Hillary campaign did). A similar process she successfully exploited using the superdelegate process during the primary to freeze out Bernie Sanders, but why would we expect a woman who repeats she doesn’t understand to know what she’s talking about?