In the latest example of progressive derangement, a group of psychologists recently held a meeting based on their conclusion that they must warn members of Congress that Donald J. Trump is mentally unfit to hold the office of the presidency.

A group of mental health professionals gathered at Yale University Thursday to discuss what they believe is their duty to warn the public of the “danger” posed by President Donald Trump. The “Duty to Warn” event was attended by roughly two dozen people and was organized Dr. Bandy Lee, assistant clinical professor in the Yale Department of Psychiatry.
— Common Dreams, 4/21/17

If one were to use the same professional psychological standard, it could be argued that Dr. Gartner is also exhibiting narcissistic, “grandiose thinking” in that HIS reasoning is superior to the hundreds of psychiatrists before him who, to this day, observe the wisdom behind their own “Goldwater Rule”.

Section 7
A physician shall recognize a responsibility to participate in activities contributing to the improvement of the community and the betterment of public health.

On occasion psychiatrists are asked for an opinion about an individual who is in the light of public attention or who has disclosed information about himself/herself through public media. In such circumstances, a psychiatrist may share with the public his or her expertise about psychiatric issues in general. However, it is unethical for a psychiatrist to offer a professional opinion unless he or she has conducted an examination and has been granted proper authorization for such a statement.
— Principles of Medical Ethics with Annotations Especially Applicable to Psychiatry

Apparently, liberal psychiatrists didn’t care for the candidacy of Republican Barry Goldwater and tried to pull a similar, professionally embarrassing stunt back in 1965. So embarrassing, those in the profession nicknamed “Section 7” of their medical ethics after Goldwater and considered it a rule that has to be brought up for timely review.

We live in an age where information on a given individual is easier to access and more abundant than ever before, particularly if that person happens to be a public figure. With that in mind, I can understand the desire to get inside the mind of a Presidential candidate. I can also understand how a patient might feel if they saw their doctor offering an uninformed medical opinion on someone they have never examined. A patient who sees that might lose confidence in their doctor, and would likely feel stigmatized by language painting a candidate with a mental disorder (real or perceived) as “unfit” or “unworthy” to assume the Presidency.
— APA President Maria A. Oquendo, M.D., Ph.D., 8/3/16

Given the statements issued in the event the media was NOT allowed to record, let’s not overlook the “ethics” Gillian and Garner are professionally bound by.

Psychiatric diagnosis occurs in the context of an evaluation, based on thorough history taking, examination, and, where applicable, collateral information. It is a departure from the methods of the profession to render an opinion without an examination and without conducting an evaluation in accordance with the standards of psychiatric practice. Such behavior compromises both the integrity of the psychiatrist and of the profession itself.

Using the argument of James Gilligan, a psychiatrist and professor at New York University, there are many cases that could be made against Hillary Clinton, who probably was his preferred general election candidate in 2016.

Over the years, we’ve been witness to her public meltdowns, read stories of her emotional tirades, verbal abuse of staff and the political destruction of women who spoke of her husband’s indiscretions and criminal attacks. That can’t make her psychologically fit to hold the highest office in the land, but who are WE to make that kind of diagnosis? 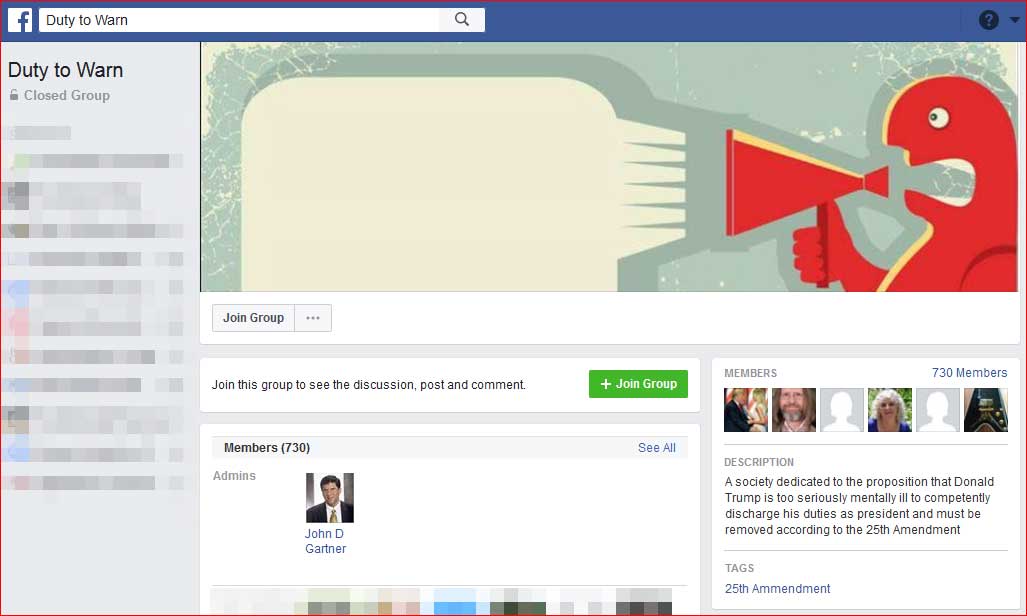 As these mental health professionals are taking their warnings to Congress, let’s not leave out the many stories we’ve seen and heard of our elected officials on Capitol Hill saying and doing things that not only are embarrassments to their constituents, but make you wonder if those people are in their right mind, period.

We’ve heard an elected member suggest NASA steer their Mars rover to where the astronauts left the American flag, another suggest putting troops on Guam would make the island tip over, multiple have concocted sophisticated bios regarding military service and heroism that never happened (we assume that falls into the sociopath category?), and the consistent practice of lying to The People can’t be shrugged off as normal behavior.

But this is really all about liberal Democrats who’ve again blown off the words of candidate Hillary who mocked Donald Trump for not promising he’d respect the results of the election and are still coming off like petulant, tantrum-throwing children who didn’t get their way.