During a Deadly Pandemic, MoveOn.org Fundraises Against Trump Reelection

At a time when the American economy is unraveling and thousands are dying, President Trump is doing his best to keep the public calm and focused on recovery. Meanwhile, others are actually soliciting off partisan division and the lament that Democrats are not getting the political traction desired given the closing in on a presidential election their own candidates are blowing.

Here’s an example of the latest email plea for anti-Trump dollars by MoveOn.org….

Last week, in the middle of Donald Trump’s mind-bogglingly incompetent handling of the coronavirus pandemic, his approval rating hit 48%—his highest ever.1

This wasn’t some bogus fly-by-night poll. It was the Washington Post-ABC News poll, one of only six polls rated A+ in the country, according to data expert Nate Silver.2 And it’s part of a trend: Trump’s polling averages have been shooting up across the board for weeks.3

Voters are rallying to their leader, while Joe Biden and Bernie Sanders have almost completely disappeared from the news. But there’s another problem: Voters don’t know how badly Trump has botched the response to this crisis. They don’t realize that his mistakes are the reason we have the most COVID-19 cases in the world.

We need to face facts: If things keep going this way, Trump is going to get re-elected. So we’ve decided to take emergency action. We’re aiming to launch and sustain a massive digital ad campaign NOW AND THROUGH ELECTION SEASON, focused on voters who approve of Trump, to educate them about his part in creating this public health disaster.

Yes, I’ll chip in monthly to help stop Trump’s rise in the polls and defeat him in November.

No, I’m sorry, I can’t make a monthly donation.

Of course as in the case of the most nonprofits, the majority of donations that come in don’t always go to the “cause”. It goes to keeping those within well paid and fed. 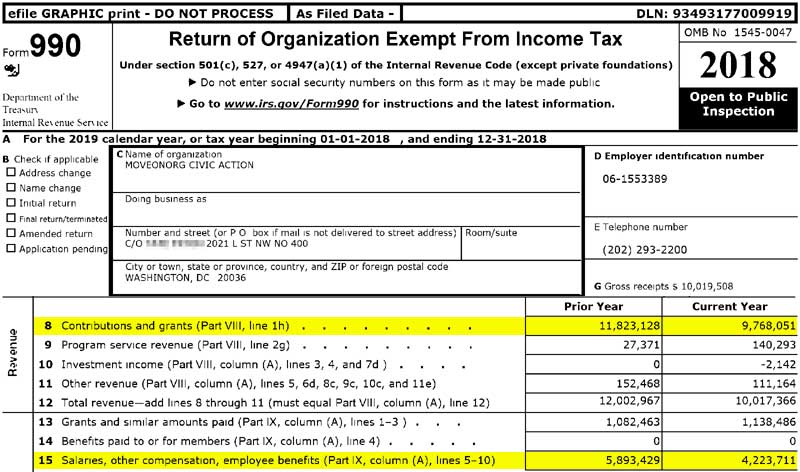 Instead of donating to those today who are on the real COVID-19 front line, for MoveOn it’s all about cashing in off Trump hate. Those who are running MoveOn aren’t making the big bucks, but they’re relatively comfortable, don’t have to put in a full 40-hour week, and even have side gigs on top of their nonprofit salaries. 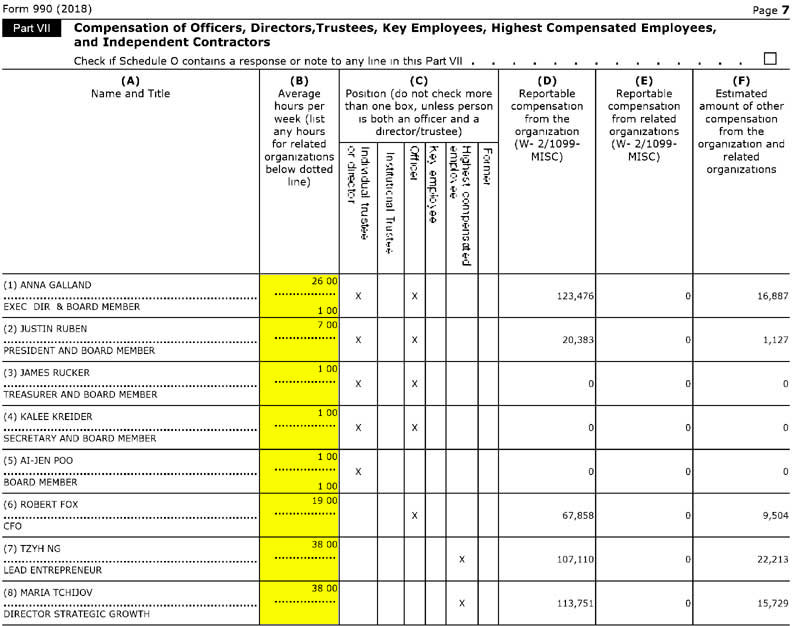 Nonprofits are required to file IRS Form 990 annually, but liberal nonprofits have traditionally been allowed to slide and since their 2018 filing, some at MoveOn have decided to move on (probably to much greener pastures).

After six years leading MoveOn Civic Action and MoveOn Political Action respectively, executive directors Anna Galland and Ilya Sheyman today announced that they will step down in 2019 after MoveOn completes a search for new leadership.
— MoveOn, 1/17/19

Like most prominent “progressive” nonprofits that protest anything they deem exclusionary or racist, MoveOn finally hired a “woman of color” to take over in 2019 who probably doesn’t earn what her predecessors did (which could be why MoveOn’s 2019 Form 990 hasn’t been released for public inspection).

Rahna Epting takes the helm of MoveOn at a time when white nationalism and authoritarianism are on the rise in the U.S. and throughout the world, massive misinformation efforts and social media manipulation are continuing to sow voter suppression and apathy, and the integrity of American democracy is in question. She will lead MoveOn in addressing these and other challenges and in advancing a positive vision of our country’s future in the 2020 elections and beyond.
— MoveOn, 5/29/19

So, the plea for dollars is on!

The corporate media has proven time after time that it’s totally incapable of holding Trump accountable. If our side doesn’t aggressively prosecute the case, Trump will get re-elected. And worse yet, the pandemic response won’t improve, and hundreds of thousands of people could die. 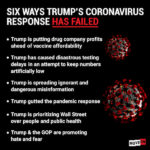 America can’t survive four more years of this president. Which is why we’re asking:

Can you chip in $12 a month to help launch and sustain the targeted ad campaign that is needed to make sure that voters know how badly Trump’s botching the crisis response, stop his rise in the polls, and defeat him in November? (The average gift from a MoveOn monthly donor is $12 a month, but whatever you can afford will go a long way.)

No, I’m sorry, I can’t make a monthly donation.

Thanks for all you do.

–Chris, Amy, Allison, Isbah, and the rest of the team