The opponents of President Trump are always reminding him of the perils of impromptu Tweets.

Former Attorney General Eric Holder sent out a Tweet that relied on the ignorance of the Democrat base and media, exploiting the incident in Charlottesville, Virginia. 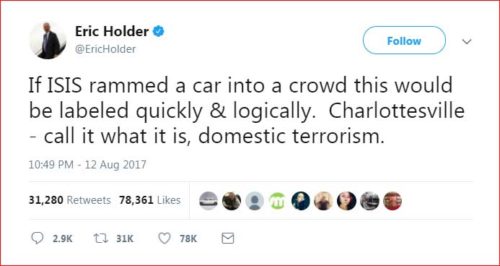 The only problem is back in 2014, almost five years after the fact, when asked if he agreed with the Obama Defense Department’s classification of the Fort Hood massacre as “workplace violence” and not “domestic terrorism”, Holder was neither quick nor logical in his response to the label.

The narcissistic need for relevance and attention can lead people to do and say stupid and often hypocritical things.