CSPAN Promo Only Labeled the ‘Conservative’; Corrects… Sort Of

CSPAN attempts to portray their channel and programming as nonpartisan.

To provide C-SPAN’s audience access to the live gavel-to-gavel proceedings of the U.S. House of Representatives and the U.S. Senate, and to other forums where public policy is discussed, debated and decided––all without editing, commentary or analysis and with a balanced presentation of points of view.
— CSPAN mission statement

However, like most broadcast and cable news channels, they go out of their way to label conservative guests (as if they’re odd) while almost never announcing their liberal guests as such.

Case in point was CSPAN’s recent promo for the “Los Angeles Times Festival of Books” and the featured speakers which would appear on a BookTV program. The voiceover on April 11 met the above biased criteria. 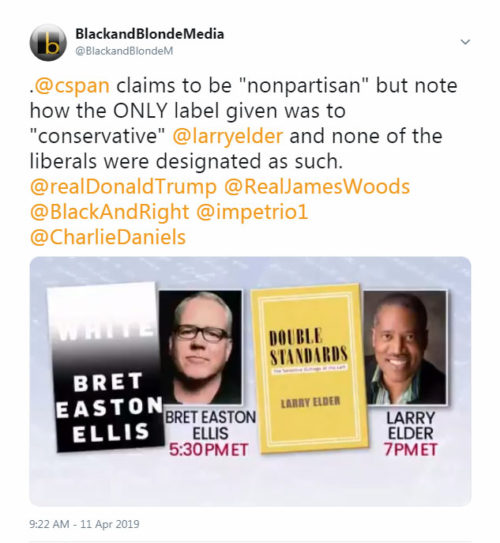 The issue was addressed… kind of.

While we captured the re-edited, nonpartisan version of the BookTV promo, the biased promo is also still airing on CSPAN.

Liberals resent being caught in their deceptions. They’ll cover their tracks but still find a way to stick it to you.