Liberal Democrats believe they are intellectually superior, especially to Republicans and any of the undereducated who voted for President Trump. The media, for three-plus years, repeated the notion that Donald Trump “colluded” with the Russians to interfere with the 2016 presidential election and deny Hillary Clinton the victory that was obviously hers to lose.

And now that the next shoe to drop will be the Inspector General of the United States Department of Justice’s report on misconduct by pro-Hillary Clinton “career” Justice Department and intelligence officials that sought to frame candidate-and-now President Trump that will surely result in criminal referrals, the colluding media is now looking for a way to say that they weren’t knowingly spreading misinformation and/or Democrat talking points.

These uber-professionals in the media… were fooled.

The 35-page dossier, spiced up with tales of prostitutes and spies, sketched out a hair-raising story more than two years ago. Russian intelligence had used bribery and blackmail to try to turn Donald J. Trump into a source and ally, it said, and the Kremlin was running some Trump campaign aides practically as agents.

But the release on Thursday of the report by the special counsel, Robert S. Mueller III, underscored what had grown clearer for months — that while many Trump aides had welcomed contacts with the Russians, some of the most sensational claims in the dossier appeared to be false, and others were impossible to prove. Mr. Mueller’s report contained over a dozen passing references to the document’s claims but no overall assessment of why so much did not check out.
— New York Times, 4/19/19

Really? Could it be the partisans on Mueller’s team wanted the liberal base to believe it and Democrats on the Hill and in the media to repeat it 24/7 on cable news and major news publications?

Yes, the New York Times just printed something MOST of the Democrat base still doesn’t know (thanks to the misdirections by the cable news megaphones) and by doing so, has discreetly thrown he under the bus for future road-kill consumption by carnivorous insect and mammal alike.

Attorney General William Barr has said he will review the F.B.I.’s conduct in the Russia investigation. His remark that there was “spying” on the Trump campaign has already encouraged Republican accusations of misconduct.

The fact AG Barr made that now-infamous implied allegation, it’s clear he wouldn’t have gone there if he didn’t know something. Something that’s now scaring the shit out of senior DOJ-FBI-CIA officials and the willing below them who dutifully carried out their mission to save the nation from Donald Trump.

While The New York Times and many other news organizations published little about the document’s unverified claims, social media partisans and television commentators discussed them almost daily over the past two years. The dossier tantalized Mr. Trump’s opponents with a worst-case account of the president’s conduct. And for those trying to make sense of the Trump-Russia saga, the dossier infused the quest for understanding with urgency.

This is yet another example of bias-by-omission as we all know if there was a piece of fiction written about Hillary Clinton, you’d never hear anyone from the media say the “Times and many other news organizations published little about the document’s unverified claims”. There would be Clintonistas on cable news vociferously defending on any panel slot available, any time of day or night, and hundreds of op ed contributions dropped from every willing publication pushing back at the details of such claims and the author(s) would be made an international pariah.

BUT… none of that ever happened.

After Mr. Trump emerged as the likely nominee, Fusion GPS kept working but turned to a new source of funding: the law firm representing the Clinton campaign, Perkins Coie. Noticing in May 2016 the Trump campaign’s unexpected affinity for Russia, Fusion hired Mr. Steele, a veteran of Britain’s MI6 intelligence agency, to dig deeper. Mr. Steele has told acquaintances that he did not know the ultimate client was the Clinton campaign. 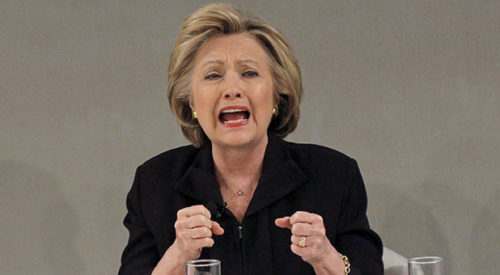 This is also around the time that Hillary Clinton internals showed the sickly, shrieking harpy wasn’t going to win the election, thus the need for an insurance policy to damage Trump down the stretch or even better, once he won cast real doubt on his legitimacy to serve as president.

Daniel Hoffman, a former C.I.A. officer who served in Moscow, said he had long suspected the dossier was contaminated by Russian fabrications. The goal, he said, would be to deepen American divisions and blur the line between truth and falsehood.

“How many times have hearings on Capitol Hill used information from the dossier?” Mr. Hoffman said. “How much damage has it already caused?”

The damage sadly, but expectedly, was done.

What’s missing now, and what will be missing until the next dragged-kicking-and-screaming media moment occurs, is how much of this former President Obama knew. As we’ve been told hundreds of collective times during his eight years in office was how smart Obama is. If that’s the case either he knew and that was bad, or he had a bunch of rogue law enforcement officials conducting a silent coup behind his back, and the fact he didn’t know that was happening was worse.

Again, the ONLY reason we know as much as we know is because Hillary lost. Had she won the presidency, federal government agencies would have seemingly perfected their weaponization against Republicans, it would have happen again anytime a Democrat candidate felt threatened, and the American people would never know an unelected select few would have more power over us than we’d ever imagine.

And let’s not forget what else this will reveal, right Great Britain?