It never takes long for opportunistic Democrats to demand additional “gun control” legislation be enacted whenever there’s a shooting at a newspaper or school or public works facility. But there’s also a sad pattern to their methods: when the victims are mostly white, there’s a clarion call for immediate action.

Pushing back against critics who say it’s too soon to contemplate gun control laws after the May 31 mass shooting at the Virginia Beach Municipal Center that killed 12 people and injured several others, Gov. Ralph Northam said Tuesday morning that he will call a special session of the Virginia legislature. His goal is to enact what he called “common sense public safety laws” this summer.
— Patch, 6/4/19

This is the consistent political reaction when it comes to white victims of gun violence. 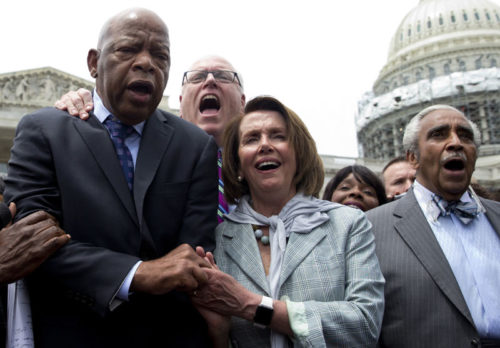 And that’s only a quick sample, however….

At least 52 people were shot and 10 killed in Chicago’s most violent weekend so far this year, leading police Superintendent Eddie Johnson on Monday to declare the uptick a “despicable level of violence.”

Now, can you imagine the outrage if THAT story made national news and instead of happening in an impoverished part of Chicago, this happened on the Upper East Side, Beverly Hills, The Hamptons, Martha’s Vineyard, La Jolla, Sea Cliff, etc.

More than 100 people were shot in Chicago over the course of one of the bloodiest Fourth of July weekends in the city’s recent history.
— TIME, 7/6/17

We all know the rapid-response, political posturing had such happened in any suburban white neighborhood. We’d see Jussie Smollett-type dragnets round-the-clock for those who committed the violence and there would be highly publicized arrests; not the number of the unsolved the West Side and South Side districts of Chicago have accepted as the norm.

At least 11 people were shot and killed and about 70 others were wounded over the weekend in Chicago, in a spasm of gun violence that police attributed mostly to gangs and that the president’s lawyer, Rudy Giuliani, used to criticize the city’s Democratic leadership.
— PBS, 8/6/18

This, too, exposes the long-standing fallacy that Democrats are still “the white man’s party” and no horrendous number of black deaths (on the street or in the womb) will make them take any action to help those in the most violent neighborhoods defend themselves.

The Chicago Police Department recorded that at least 74 people were shot in the country’s third-largest city, with 28 of those shootings occurring between Friday evening and Sunday morning.
— Newsweek, 5/6/18

Meanwhile, the Democrat Party continues to show us whose lives they really value and whose they really don’t.