Washington, D.C., like Hollywood, believes Americans are stupid. After mocked, failed attempts, using TikTok influencers and child actors to persuade the electorate the Biden administration was not as bad as we all know it’s been, the White House became the latest stage for theatrics after the Uvalde shooting.

When it comes to media sensationalizing, Matthew McConaughey is one of many in Hollywood who absolve themselves of the violent depictions of which they are highly paid to perform. Don’t forget, these are the same entertainment hypocrites who create documentaries and/or PSAs to influence public behavior, most of the time for their preferred pet political outcomes, yet they are the same ones who’ll declare the graphic gun violence that permeate movies and television programs in no way influence the potential behavior of some viewers.

Would Matthew McConaughey have taken time out of his professional or leisure schedule had the shooting not happened in his hometown? What gives with his over-the-top praise of politicians; the very people he’s now imploring to do something about gun control?

Could it be he does want to be one of them when the curtain closes on his so-so acting career? What he’s saying now is not what he’s said before.

The actor appeared on the “The Hugh Hewitt Show” recently and when asked if he would consider running for the office of the longhorn state he said, ”I don’t know. I mean, that wouldn’t be up to me. It would be up to the people more than it would me. I would say this: Look, politics seems to be a broken business to me right now. And when politics redefine its purpose, I could be a hell of a lot more interested,” the “Dallas Buyers Club” actor said on the show.

“I want to get behind personal values to rebind our social contracts with each other as Americans, as people again,“ McConaughey told Hewitt.
— Hola, 11/19/20 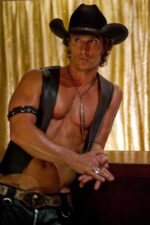 Seeing how he read his “speech” at the White House press podium and the “values” espoused in some of the acting roles he accepted are questionable, Matthew McConaughey comes off as a self-righteous stooge willing to be used by a callous White House and Democrat Party opting for theatrics because their politics are beyond punishing the American people.

The American people now want to punish them and if it takes getting the services of an entertainment producer to put some flash into the January 6 primetime dramatics or call on an actor to sanctimoniously read his outrage to an awestruck press corp, some people will do anything to suck up to exploiters.