Granted, he did inherit a bad economy partially spurred on by a housing crisis of the Democrats’ making, but Barack Obama admitted that not even a “magic wand” could fix it in the foreseeable future.

Now, he’s telling all who’ll listen that HE laid the foundation for the economy President Trump implemented and is rightfully taking credit for; an American economy tearing it up because Trump’s done all the things Obama was ideologically resistant to even try.

For eight years, President Obama presided over the worst economic recovery in modern times. For six years, he blamed Republicans in Congress for thwarting his spending agenda and hampering growth. In his last two years in office, he claimed that 2% growth was the best we could hope for. And in his last year in office, while the economy was again stalling out, Obama claimed that Trump’s tax cuts and deregulation would only make things worse.
— Investors, 12/19

During President Donald Trump’s time in office, the economy has achieved feats most experts thought impossible. GDP is growing at a 3 percent-plus rate. The unemployment rate is near a 50-year low. Meanwhile, the stock market has jumped 27 percent amid a surge in corporate profits. But even they acknowledge that the current numbers are a uniquely Trumpian achievement and not owed to policies already set in motion when he took office.
— CNBC, 9/7/18 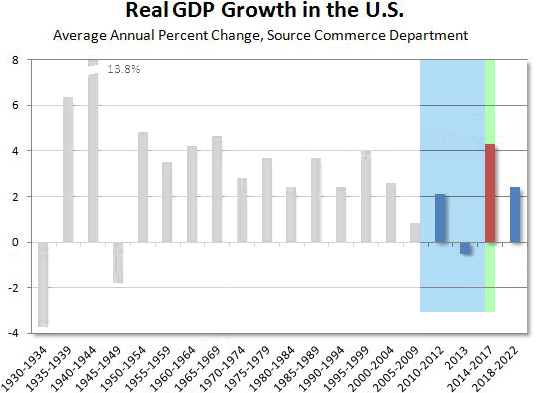 Given he’s talking to those who blindly absorb and are critical-thinking challenged, former President Obama’s current talking points still make absolutely no sense.

During a June 1, 2016 town hall in Elkhart, Indiana, Obama admitted to the nation that after eight years of his economic policies, some jobs ‘are just not going to come back’; a stark contrast to then-candidate Donald Trump’s campaign assurances and his performance as president since. If Obama conceded our economy was going to suck for the foreseeable future, how can he now claim that he laid the groundwork for the economic boom that began shortly after Trump was declared president and what’s he’s done since?

In his speech in Illinois last Friday, Obama complained that Republicans were taking credit for his work.

“When you hear how great the economy’s doing right now, let’s just remember when this recovery started,” he said. “I mean, I’m glad it’s continued, but … suddenly Republicans are saying it’s a miracle.”
— Investors, 12/19

Nope, not a miracle. Just a promise kept by someone who knows what he’s doing.

President Trump’s achievements (despite being under a constant negative media barrage, a special counsel “Russia collusion” investigation that came up with zip, and impeachment acquittal) have been nothing but historic.

When you’re preaching to those who recite partisan talking points, suspension of common sense provides adequate cover for the disingenuous, if not downright intentionally dishonest.