The left believes President Trump regards his reelection more important than the health and wellbeing of the American people and are saying as much.

Clearly, it’s not really about the stock market after all — because other flesh-and-blood humans are invested in the stock market, and who gives a f*#k about them, right? No, it’s all about Trump’s reelection prospects. And he has two choices: 1) Do the right thing, save potentially millions of lives, and ride off into the sunset knowing you did your level best for your fellow humans or 2) be Donald Trump.
— Daily Sound & Fury, 3/26/20

My enemies want me to keep the country closed so I lose the election: Donald Trump claims ‘fake news’ is pushing need to lockdown in the face of coronavirus out of hatred of him

The media clearly regards the Coronavirus and his reelection as equally important topics, especially when it comes to how Americans are perceiving the president’s response to the Chinese Wuhan virus.

Despite the ongoing tumult as a result of all things COVID-19, others are also taking notice of the politics (which we all know would be a timely and pertinent topic if their favorite former president were in the same position).

If President Trump’s approval rating was cratering, they’d be airing replays of his briefings hourly during their programs. But alas, this is not the case.

Sadly, the actual number was 80, but this is also an illustration of why the media has a public disapproval number much greater than President Trump and you know it really pisses them off. 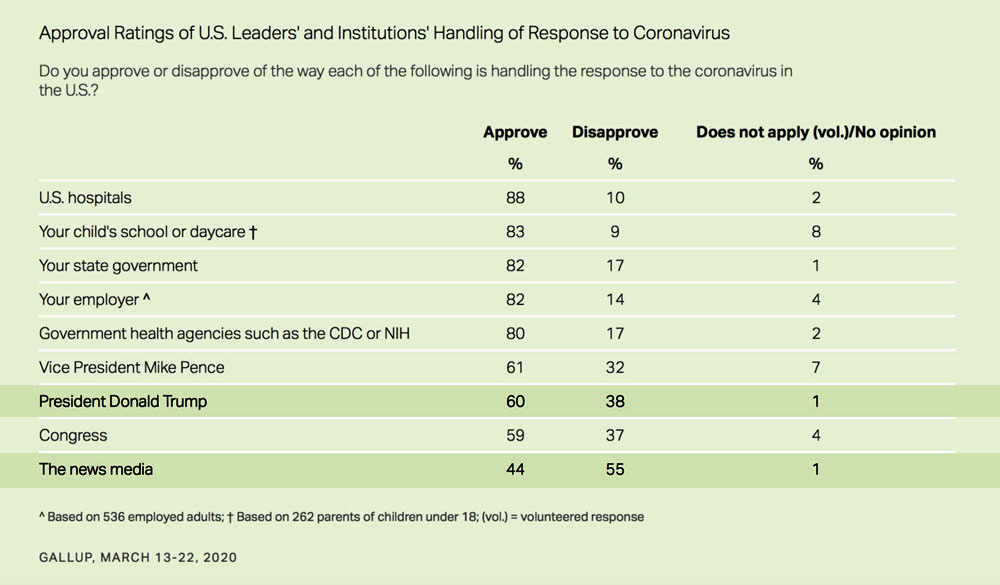 And why shouldn’t the president be concerned about his reelection seeing how the Democrat plan from Day One was to do anything and everything to have him removed from office (if not in handcuffs) during his first term? His even being able to talk 2020 reelection is a political miracle in itself.

While circumnavigating the uncharted waters of the Wuhan virus has been traumatizing for the nation, President Trump’s response has been calm, cool and collected despite the ever-evolving information he’s been receiving on a daily basis. His keeping the people informed (Leadership 1.01) without having to rely on speechwriters and focus groups to hone a self-serving political message continues to help the nation get through these times of uncertainty, despite the best efforts of the left and their media.