The Southern Poverty Law Center has made it their nonprofit mission to root out “bigotry” wherever they find it.

The SPLC is dedicated to fighting hate and bigotry and to seeking justice for the most vulnerable members of our society. Using litigation, education, and other forms of advocacy, the SPLC works toward the day when the ideals of equal justice and equal opportunity will be a reality.
— SLPC website, “About us”

The beauty of progressive nonprofits is that they can make their so-called objectives as vague and unachievable as possible (“save the planet”…?), because if they were to actually achieve their goals, they should go out of business. We’ve also found that certain liberal nonprofits, especially those with spinoffs that indoctrinate on issues like racism, know how to tug at those bleeding heartstrings.

To be fair, the Southern Poverty Law Center has always had a scant few minorities on their Board of Directors. However, those positions appear to be unpaid and their representation are one of the only things being reduced at the SPLC.

For a group that proudly calls out racial “bigotry”, the Southern Poverty Law Center leadership has always been and continues to be very, very white. 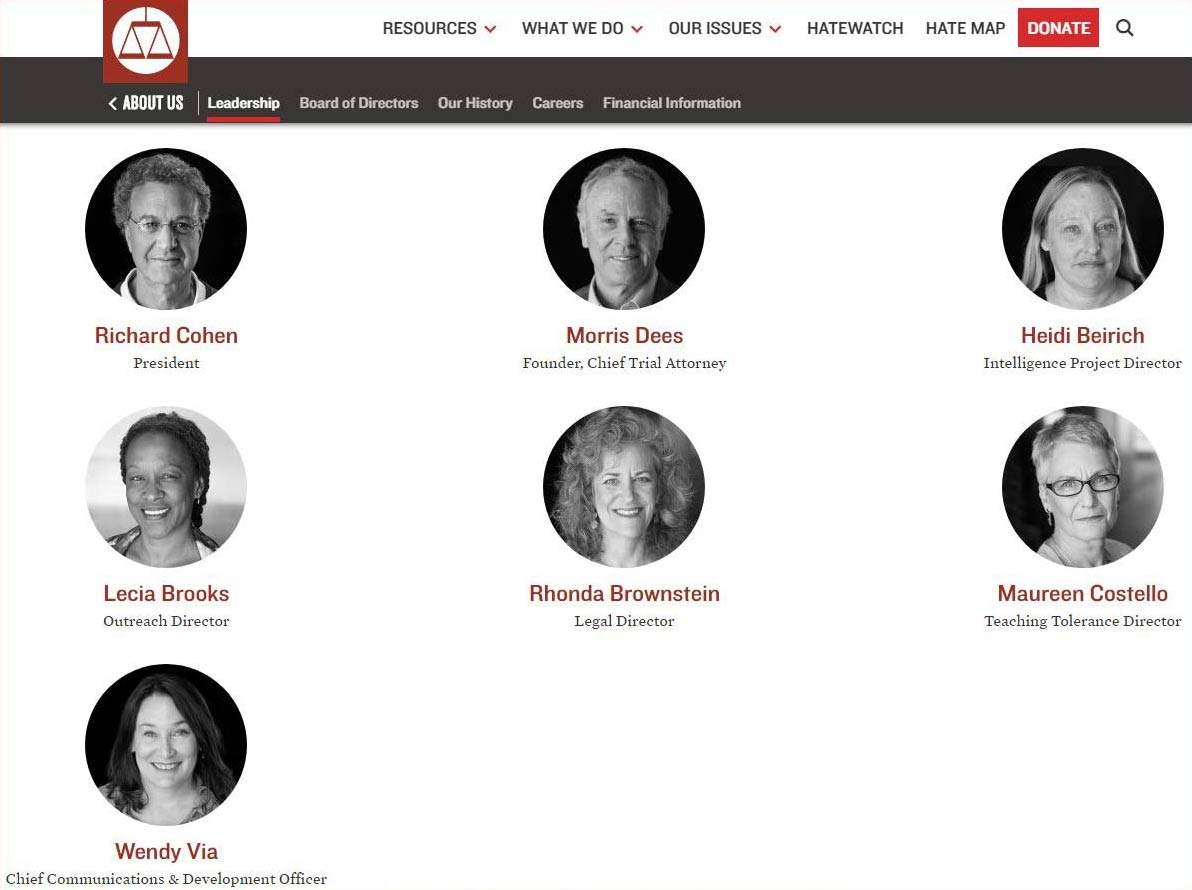 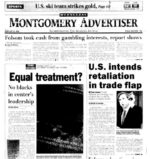 The SPLC “leadership” pictured above from May 2017 boasts of only ONE person of color and their lack of diversity appears also be a part of their proud tradition. We speculate that a more recent, public tax return might show Ms. Lecia Brooks may not be earning anywhere close to where the previously, all-white leadership did back in 2015….

According to the latest 2016 Form 990 tax filing made available by the SLPC (timely tax filing requirements for nonprofits are quite lax), “leadership” is living quite comfortably off bleeding heart donations. It must be nice to be a lawyer like Morris Dees who can sue anyone he wants, knowing he’ll get paid regardless of outcome in an arena where losses can also be financially symbolic and lucrative. 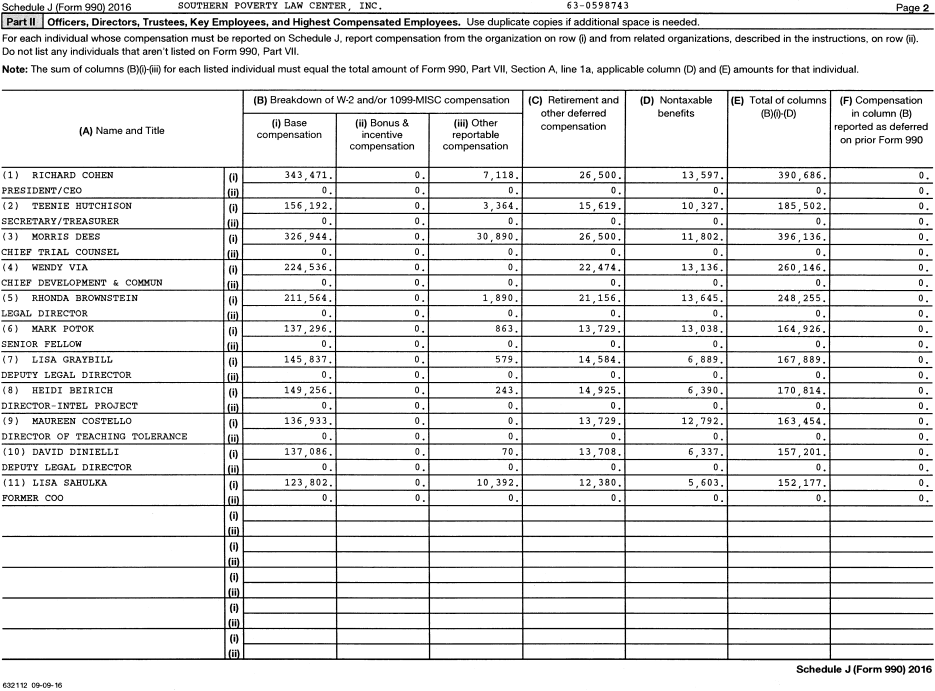 So while the SPLC will find every opportunity to smear anyone they can as a racist, sexist, homophobic and/or Islamophobic, remember where all those tax-deductible donations are going vice the ROI. 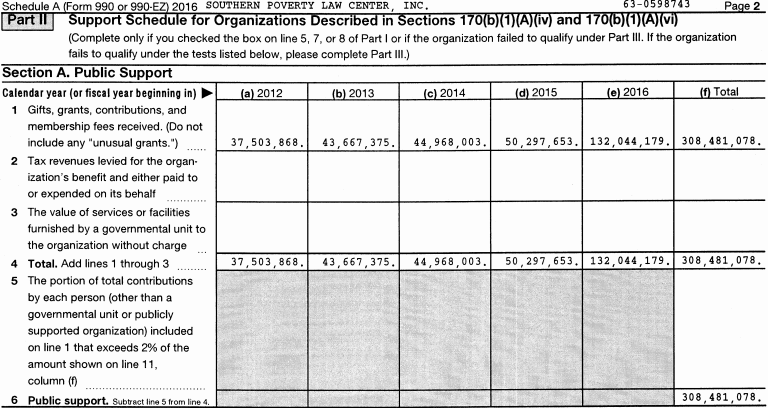 One would think for a $132 million annum, we’d see a little more from the SPLC than an “anecdotal”-plagued survey the media and activists gleefully run with, Facebook memes with as many black faces as they could Photoshop, an occasional press conference, hardly any pics of any gala events or leadership appearances, a few lawsuits and coincidental warnings that shit could happen, and an email or so a week as an update.

Morris Dees is a con man and fraud, as I and others, such as U.S. Circuit Judge Cecil Poole, have observed and as has been documented by John Egerton, Harper’s, the Montgomery Advertiser in its “Charity of Riches” series, and others.

The positive contributions Dees has made to justice–most undertaken based upon calculations as to their publicity and fund raising potential–are far overshadowed by what Harper’s described as his “flagrantly misleading” solicitations for money. He has raised millions upon millions of dollars with various schemes, never mentioning that he does not need the money because he has $175 million and two “poverty palace” buildings in Montgomery. He has taken advantage of naive, well-meaning people–some of moderate or low incomes–who believe his pitches and give to his $175-million operation. He has spent most of what they have sent him to raise still more millions, pay high salaries, and promote himself. Because he spends so much on fund raising, his operation spends $30 million a year to accomplish less than what many other organizations accomplish on shoestring budgets.
— Stephen B. Bright, director of Southern Center for Human Rights (1982-2005), president and senior counsel in 2006

And no nonprofit is successful without having abundant donations, thus monetary assets so the principles’ mortgages and car payments will be paid, bellies will be full, wardrobes will be updated, scenic vacations will be available to decompress, and Christmas will have many presents under the tree, unlike those with no voices they claim to champion.

The Southern Poverty Law Center appears to be yet another liberal career mill, funded by the generosity of the inflamed, and exempted from the same taxes every real business has to pay.

They don’t have a lot going for them when it comes to diversity in their leadership. It’s mostly white, and we all know what the Southern Poverty Law Center would be saying about a conservative group with the same physical makeup because that do-as-I-say-not-as-I-do is something racebaiters do best. 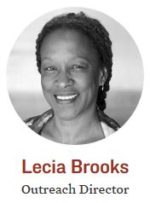 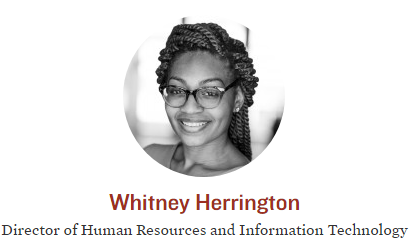 Just ask Lecia Brooks and within a month of this posting, the Southern Poverty Law Center hired another black person in leadership… who’s in charge of hiring and is clearly SPLC material!

The Southern Poverty Law Center is just a bleeding heart scam, has been known to have been such and has been stashing away unknown amounts of cash for many, many years. 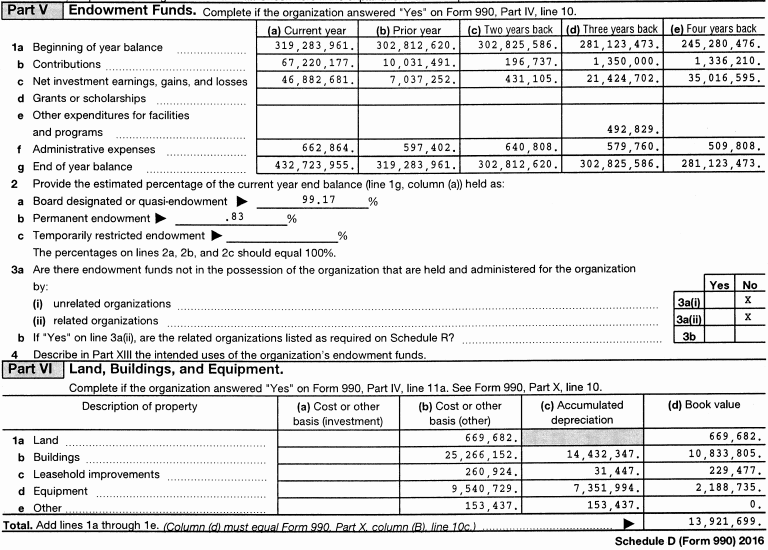 So, the next time you hear anyone or any group labeled as “hate”, ask yourselves why, who named them as such, and who could you contact if that label were falsely issued to you?

Try Morris Dees, that is if you can reach him in the nice home that “poverty” racebaiting built for him….

and it also may be tough reaching the SPLC in the Cayman Islands. 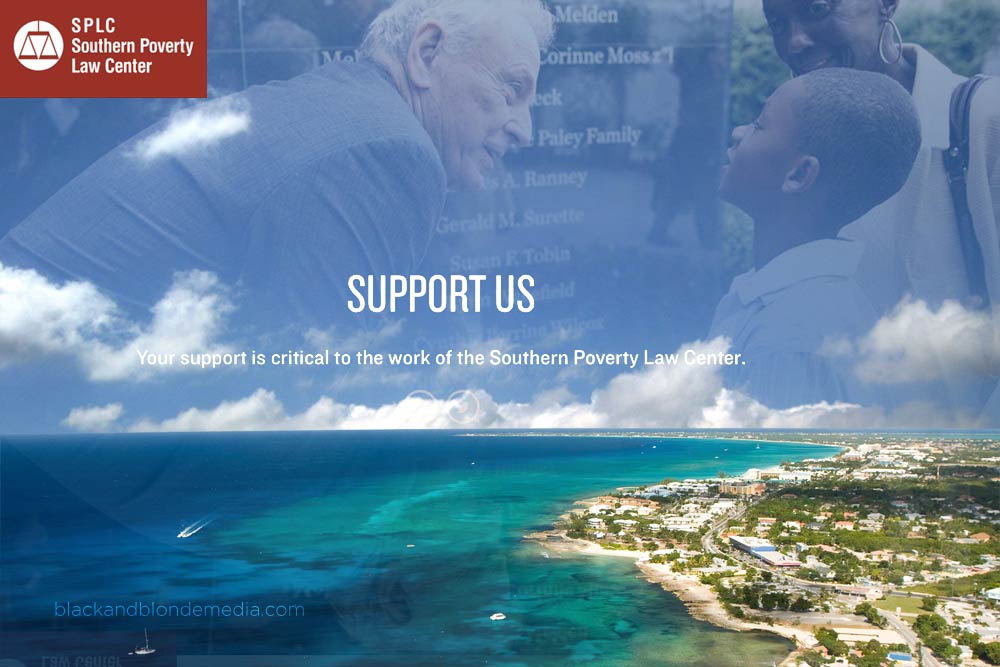 It looks like Morris Dees’ hustling days (or something else) finally caught up to him. 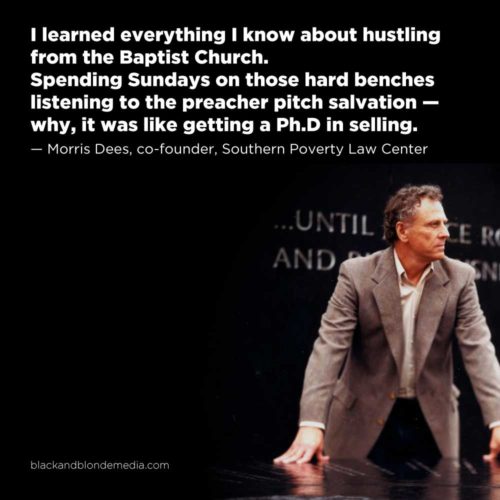 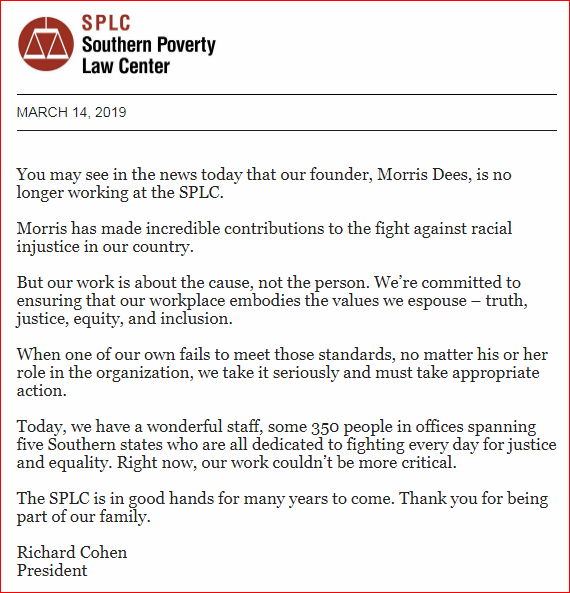 SPLC President Richard Cohen said in a statement Dees’ dismissal was effective on Wednesday, March 13. When pressed for details on what led to the termination, the organization declined to elaborate.

“It was not my decision, what they did,” Dees said when reached by phone. “I wish the center the absolute best. Whatever reasons they had of theirs, I don’t know.“
— Montgomery Advertiser, 3/14/19

It must suck being blindsided. What goes around, comes around and around….

It was obviously worse that first reported.

The president of the Southern Poverty Law Center, Richard Cohen, announced his resignation Friday, the latest in a series of high-profile departures at the anti-hate organization that have come amid allegations of misconduct and workplace discrimination. Cohen’s resignation comes the same day as a resignation by the organization’s legal director, Rhonda Brownstein, who did not give a reason for her departure in a brief email to her colleagues. Brownstein did not respond to requests for comment.

The recent resignations came amid staff concerns over the recent resignation of one of the organization’s top black attorneys, Meredith Horton, who wrote in a farewell email that “there is more work to do in the legal department and across the organization to ensure that SPLC is a place where everyone is heard and respected and where the values we are committed to pursuing externally are also being practiced internally.”

Following Horton’s announcement, about two dozen employees signed a letter to management and to the board saying they were concerned that internal “allegations of mistreatment, sexual harassment, gender discrimination, and racism threaten the moral authority of this organization and our integrity along with it.”
— Los Angeles Times, 3/22/19

Everyone is finally coming around to our original assessment of the Southern Poverty Law Center.

A review of the center’s 2019 board and senior staff reveals that senior leadership at SPLC remains largely white. Last week, multiple employees sent a signed letter to SPLC leadership outlining concerns about workplace culture as well as sexism and racism, according to a Los Angeles Times report.

They’re mostly a liberal, white-run racist (and sexist) nonprofit and rarely does anything good come from that. And to make matters worse…

… the SPLC chose the very person who’s now in the middle of the Jussie Smollett hoax to clean up their mess.

Tchen passed Foxx’s number to a family member of Smollett, and the ensuing conversations with the relative were later cited by the prosecutor as the reason she recused herself from the probe.
— New York Post, 3/14/19

It will be interesting to not how many media organizations and federal agencies continue to cite the SPLC when attempting to call out anyone as a racist, given what’s going on behind their closed doors. It will also be interesting to see how the media will also mute their stories on this “nonprofit” as to not harm their fundraising largess.

It’s sounding as bad as suspected.

Some employees at the Southern Poverty Law Center say the legendary civil rights nonprofit group suffers from a “systemic culture of racism and sexism within its workplace.”

CNN spoke with three current employees of the organization who talked on condition of anonymity because of fears over possible retribution. It was one of those employees who cited the systemic problems with racism and sexism, and a second employee agreed with that assessment.
— CNN, 3/29/19