The media loves to thrown people’s words at them. They accuse people of lying, destroy people’s character based on their words, yet all hell breaks loose when those very techniques are thrown back at them. 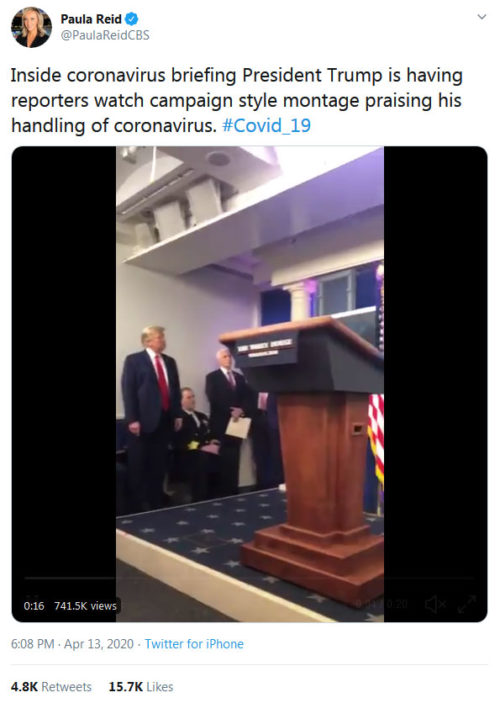 The meltdown occurred at CNN, MSNBC, and the New York Times because they were exposed. The lies they’ve been telling. And look, Trump had to do this. The White House did this because the New York Times ran that story on Saturday that Trump was unprepared, that millions and millions more lives would be saved if Trump had just known what he was doing.
— Rush Limbaugh, 4/14/20

All notion of the lack “respect for the office” was evidenced when millennial “journalist” Paula Reid spoke to the president in a manner we all know she wouldn’t dare do to her boss unless she really wanted to get fired. It’s also clear CBS News was prepared for fireworks as they only had three lower third graphics prepared for the briefing: “White House Coronavirus Task Force gives update“, “For the latest on the Coronavirus response go to CBSNews.com/coronavirus“, and the only person identified by name was not doctors Fauci or Birx, Treasury secretary Mnuchin or even President Trump: it was “Paula Reid CBS News White House Correspondent“.

All it took to tweak her (and others in the media) was the audacity of President Trump, not only throwing their words back in their faces but also doing to their faces and making them sit through it. 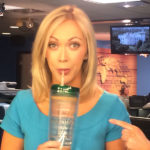 Not that anyone would expect full disclosure from the media and how personal issues might taint coverage, but Paula Reid’s husband is a lobbyist for China which could be why the president said she’s the “last person on earth” who’d get any heads up on anything regarding “consequences” for China.

CNN’s John King later voiced his displeasure of his fellow media correspondents having to be so demeaned as to have to watch “taxpayer-funded propaganda”. King believes his CNN audience is ignorant of the fact that many federal agencies have fully-staffed, professional video studios where officials put out “taxpayer-funded” propaganda any time they want. The problem for King is President Trump countered some of the very incorrect messages national media outlets sent out to the public, just because it was the opposite of what the president said.

While King and Wolf Blitzer lament the new low at White House pressers, the unprecedented number of attacks on President Trump slightly outnumber the amount of incorrect, cherry-picked stories the media released with fury and retractions buried, if corrected at all. But as the broadcast media has conveniently edited-for-time as their excuse for taking things out of context, President Trump should refrain from taking up valuable time for during future press briefings.

The White House should put out longer versions on social media, tagging members of the media who got things very wrong, numerous times, and still have their jobs.