The #GeorgeFloydProtests Are the Democrats’ 2020 Election Hail Mary

It’s been a well-known fact for decades. Black people, for the most part, decide presidential elections.

It’s also a well known fact that, up until a few years ago, blacks voted in the high 90 percentile for Democrats. When they come out and vote, the Democrat normally wins. When they sit the election out, the Democrat doesn’t fare as well. Ask Hillary Clinton.

President Donald Trump has now changed long-standing norms through deeds; something blacks are not accustomed to from pandering politicians.

This has not gone unnoticed.

The number is notable because only 8 percent of blacks voted for Trump in 2016, according to Cornell University’s Roper Center.
— The Epoch Times, 11/24/20

It’s obvious why these numbers haven’t been reported by the American media. Thirty-four percent of blacks preferring the Republican are numbers not seen for decades and Donald Trump didn’t achieve this by traditional phony “outreach” overtures but by creating an economic atmosphere where more blacks have been able to get jobs and elevate their standard of living beyond any empty lip service Democrats perform every four years.

Quan Lanae Green Her life has improved under Trump. “I’ve been doing very well financially,” said Green who invests in real estate and the stock market. “Since Trump’s been in office, my stocks have increased exponentially.”

Mike Reyes, who voted for Barack Obama but sat out the 2016 election, is also enthusiastic about job-creation numbers and a declining consumer price index for prescription drugs.

This year, Shalah Collins said, she’ll vote for Trump. Being a business owner changed her thinking and priorities. Over the past few years, the single mom has appreciated the “historically low tax environment. For those who are self-employed, they can put away a lot more money for retirement,” she said.

“I believe in Trump’s message of putting the country first and his economic policies. I don’t want to pay more taxes.”
— New York Post, 2/29/20

While those in the political class create “outreach” programs to justify their paychecks, as said here many times, deciding who to vote for (or against) is a personal decision including profound ramifications. No outside prodding works, especially by outsiders with no “skin” in the game.

QUAN LANAE GREEN, 35, POUGHKEEPSIE
Over the past couple of years, she’s broken from her family.

MIKE REYES, 32, HUDSON HEIGHTS
In 2018, his girlfriend broke up with him after he declared his support for the president. “She didn’t like my views,” said Reyes, who works in healthcare technology.

This is quite familiar for any black who is NOT a Democrat but more and more have thrown the towel in their faces and placed their allegiance to President Trump and if you don’t think this has set off the fire alarm on the left, you’re politically ignorant.

The 2020 prospect for a Joe Biden presidential run is scary enough for Democrats. That expected 90-95%, now cut down to 70% at the least, is a nightmarish reality and when people become desperate, they’ll do desperate things as Democrats cannot allow their remaining black voters to sit this one out, like in 2016.

Taking the race card to the next level is their only recourse, and the beauty of it for Democrats is that most of the carnage will not occur in their neighborhoods. Think about it: most normal people would NEVER destroy their own areas, despite how pissed off they get about an issue. But when it predictably happens in a black neighborhood, white liberal Democrats and their selected black Stepin Fetchits express public justifications for such foolishness which dehumanizes blacks and removes any notion that these are people actually capable of knowing right from wrong.

“You’ve got more questions? Well, I tell you what, if you have a problem figuring out whether you’re for me or Trump, then you ain’t black.”
— Politico, 5/26/20

With the black vote clearly in play, Democrats needed to figure out how to keep them from sitting out 2020, which not only would bode badly for Biden but every Democrat down ticket.

Go back to the old playbook and make EVERYTHING about race. 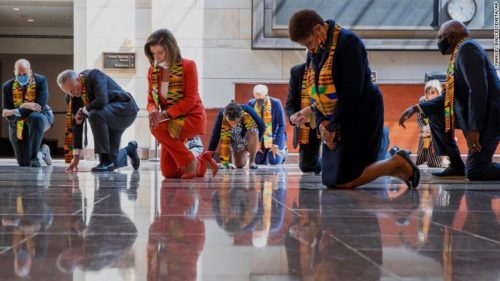 The Democrat Party is now down for the struggle, at least for show (again…).

Congressional Democrats wore stoles made of Kente cloth during a moment of silence for George Floyd, drawing criticism from observers who felt they made the traditional African textile into a political prop.
— CNN, 6/8/20

We now see #woke liberals making anything and everything a referendum about race, and if the worst in perceptions of black people are presented to the American people as a whole, so be it. “Mostly peaceful” demonstrations including the standard #BLM traffic disruptions, private and public property damage, looting, assaults on law enforcement, and the residual injury and death occurring in black communities is acceptable to Democrats. The bleed-over into suburban and rural areas brought out the Karens and those who’ve joined the latest fad of coffee shop white liberals being more concerned about black issues than blacks. 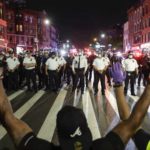 This is not about “systemic racism” as we’re being fed.

One death is a tragedy; a million deaths a statistic.
— Attributed to Josef Stalin

This is about fat, pasty white liberals in the political infrastructure not only facing four more years of President Trump, but the potential of a political ass-whuppin’ down ballot all because of the reality of an unpredictable, senile old man running at the top of the ticket. Have you heard one Democrat pundit eagerly awaiting the Trump-Biden debates? There’s a very good reason for that and it’s not one of enthusiastic anticipation.

The Democrat black vote, always taken for granted, is no longer a lock and those with the most to lose are willing to sacrifice any life to ensure their lifestyles and power.

This is the Hail Mary of all Hail Marys. While we’re being inundated with polls showing outrageous Biden leads over President Trump, watch what’s going on in the streets. The loudest black mouths will be given megaphones, Democrat politicians will grovel for the cameras, we’ll endure more of their simple chants in the streets, they’ll propose the nonsensical like “#DefundThePolice“, we’ll be lectured-to by entertainment elites and insulted on social media, all because there is a potential that a Trump victory is a fait accompli and their candidate will redefine the term “buffoon”.