Data is only as good as how it’s obtained, how it’s processed, and how the results are disseminated.

The recent panic regarding the latest “spike” in Coronavirus cases in the United States is being used by state and local politicians to re-shutdown their economies. While many of us have suspected the increase in deaths are being sensationalized while the corresponding death rates are very low and unreported.

But what if the surge in COVID-19 cases, as a result of increased testing, is also irresponsibly bogus?

Think about this: one obscure local television affiliate decided to investigate the numbers issued by their state and found the numbers totally wrong, and the one constant was the issued numbers where highly inflated as opposed to being all over the place. What are the chances of that and how many other areas around the country are being shutdown again based on consistently overinflated “positivity rates”?

Again, this is NOT about public safety.

It’s about tanking the President’s reelection trump card: the economy. If millions of Americans lose their businesses and jobs, it’s a small price to pay while state and federal politicians continue to enjoy no break in their paychecks since this all began. As long as Donald Trump is defeated, to them, that’s all that matters and making sure a few decimal points are moved in their favor doesn’t hurt.

It appears these inflated numbers are either a case of gross incompetence or maybe local #resistance?

Floridians depend on the coronavirus numbers, but they might not be telling the whole story. Several lawmakers say they are extremely disturbed by the findings, saying there needs to be more oversight. After FOX 35 News noticed errors in the state’s report on positivity rates, the Florida Department of Health said that some laboratories have not been reporting negative test result data to the state. Countless labs have reported a 100 percent positivity rate, which means every single person tested was positive. Other labs had very high positivity rates.
— WOFL Fox 35, 7/15/20

The Florida Department of Health is now passing the buck only because the narrative was publicly called into question. Will anyone be held accountable for the dissemination of faulty information that steers public policy or will the false narrative be blown off as to keep the economy squelched as long as possible until the November election?

It may be mocked as “conspiracy theory” but this is now steering into the oncoming lane.

In an email, AdventHealth’s communication manager told FOX 35 News, “The state’s direction to Centra Care was to only report positive cases, so that’s what they are doing. You would have to ask the state why they would assign a percentage without having the total.”
— WOFL Fox 35, 7/15/20

Such a “direction” would not be done in a vacuum and given the national implications, at the local level.

Just who would have the power to order major hospitals to issue incorrect data numbers that would be used to affect and implement public policy?

Chatter on Facebook appears to corroborate some of the testing anomalies mentioned. 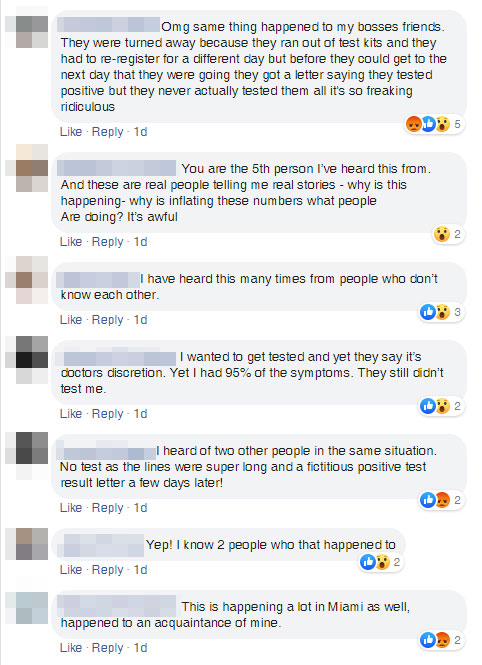 We’ll see what the Florida Department of Health says about this, IF they do at all.