When you’re talking about a political party that’s been around as long as the Democrats, you can say they’re a lot of things; stupid isn’t one of them.

During Donald Trump’s first term, Democrats were in vocal and legislative opposition but they weren’t hurting financially either. Their personal portfolios have benefited like those of millions of Americans. But after the 2018 midterms, a political fissure erupted within the Democrat Party; a fissure that was unprecedented and probably horrifying to blindsided leadership.

It was called gross insubordination by punk ass freshmen.

Speaker Nancy Pelosi implored her majority, after days of high-profile public infighting, to focus on common goals — including defeating President Donald Trump — and to silence the sniping that threatens their fragile hold on power. The lengthy closed-door session underscored the broader divisions between her centrist and liberal members — and between Pelosi and Rep. Alexandria Ocasio-Cortez with her “squad” of star-power freshmen — that are testing party unity and reshaping Democrats ahead of the 2020 election.

“We’re a family and we have our moments,” Pelosi told colleagues. “You got a complaint? You come and talk to me about it. But do not tweet about our members and expect us to think that that is just OK.”
— Associated Press, 7/10/19

Incoming freshmen were traditionally given closet-size rooms on the top floor of the Cannon House Office Building, furthest away from the elevator and closest to the stairs. They may receive insignificant committee assignments, if at all. Their first term was one of learning the ropes, and above all else, respecting the established hierarchy. The 2018 Democrat freshmen class, led by AOC, blew that up.

Democratic Rep. Alexandria Ocasio-Cortez of New York suggested that House Speaker Nancy Pelosi has been “singling out” freshman congresswomen of color — the latest charge in a growing rift between the leader of the party in the chamber and the high-profile progressive freshman.

“When these comments first started, I kind of thought that she was keeping the progressive flank at more of an arm’s distance in order to protect more moderate members, which I understood,” Ocasio-Cortez told The Washington Post in an interview published Wednesday. “But the persistent singling out … it got to a point where it was just outright disrespectful … the explicit singling out of newly elected women of color,” Ocasio-Cortez added.
— CNN, 7/11/19

Democrats like to accuse others, rightly or wrongly, of racism. They, especially a Democrat speaker, don’t like it when they’re accused by petulant “women of color” freshmen. You know Pelosi was privately fuming….

According to the media, there was a reconciliation. 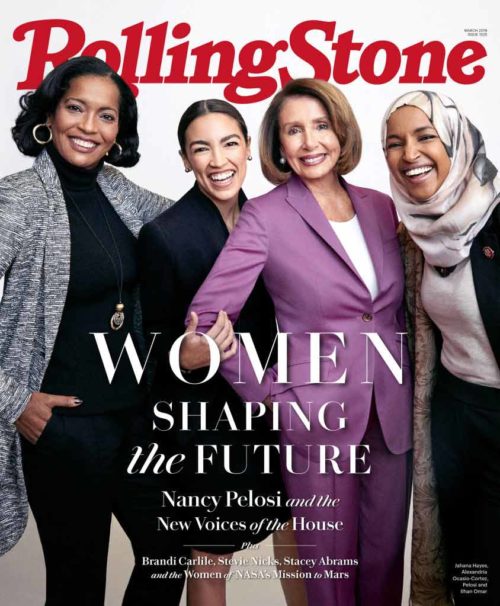 At that time, the Trump economy was rolling along like a freight train. If you go by James Carville’s “It’s the economy, stupid”, higher ups within the DNC were probably ready to throw in the 2020 towel. But there was another problem: AOC and the Squad had the attention of millions, they were driving a socialist agenda that was way too radical for a party that always tried to appear level-headed and “moderate”. The Squad’s followers were rabid and out of the control of Pelosi and other senior party members.

Could the total upheaval of norms we’re seeing today be a plot to assure Democrats lose ugly in 2020?

After every presidential election, there is that customary public postmortem.

Speaker Pelosi will not accept any blame for a Trump landslide victory. She will not pile on the Democratic National Committee or any party PAC. Democrat Capitol Hill leadership will not assume responsibility for an electoral beat down. Despite any political loss, Pelosi and her party leadership will personally weather any storm so burning down the house will not put them on the street.

However, Democrats might blame a 2020 presidential and down-ballot shellacking on the disastrous messaging from irrational freshmen and call for a more reasoned and traditional agenda for the Democrat Party. Translation: they’ll summarily set the insubordinate children up to be primaried and hopefully banished in 2022.

Seriously, even the staunchest of Democrats weren’t for a job-killing Green New Deal, let alone the violence and destruction associated with #BlackLivesMatter and a George Floyd crisis not wasted. Most Democrat voters aren’t for dismantling police forces around the country. Liberal CEOs, professionals, academics, entertainment celebrities, and other big money donors nationwide are being bit by the millennials’ #CancelCulture and you know whose private phone numbers they have on speed dial.

Maybe the party is giving their socialist know-it-all loudmouths the rope to hang themselves.

And given the media allegiance to the Democrat Party, all these polls implying President Trump being behind by double digits is not a fluke. The Democrat base is being set up for a face plant into the concrete. Look who they’re presenting to their base as the party presidential nominee. A possibly senile old man who really has nothing to lose when it comes to a political career, unlike those whose names are being bandied about. Why do you think it’s taking so long for Joe Biden’s campaign to find a running mate? Who’s going to want that on a resume once the long knives of finger-pointing begins the morning after a Trump landslide?

A mass defection to Donald Trump combined with a depressed party turnout mean Democrats could find themselves in the minority again. Do you really think Nancy Pelosi will accept blame when having to give up the gavel while positioning herself to be Minority Leader? Do you think any of the senior members will decide embracing and publicly justifying socialism, CHOP zones, vandalism and/or removal of monuments, and “mostly peaceful” protests in the streets will be the template for 2022 success?

Do you think they’ll allow themselves to be forced to kneel again… ever?

Washington, D.C. should be renamed to what it’s always been known for: Washington CYA. Specifically, that’s how Democrats become old Democrats.

There will be a concerted effort, should the Election 2020 Democrat ass-whuppin’ be felt from Capitol Hill down through every state legislature, to have a message publicly sent that things will go back to the ways they’ve always been done. Democrats will again want to appear moderate and they’ll promise to go back to their safer default where they can “pass the bill so that you can find out what is in it”.

The media will be directed to turn on The Squad. Their arrogance will be highlighted and replayed in slow motion. Apologies won’t be issued, making matters worse. The inside-the-Beltway establishment will assert their rightful authority, showing no desire to spare the rod. Like the old days, these children will be spanked in the street for all to see.

Not only has the Democrat Party put all their eggs in a basket carried by a man with clear cognitive issues, but now with a woman who was so popular with the base that she was the first to drop out during their presidential primary season.

Again, the question should be why….