While the left and their media claims Trump supporters are “domestic terrorists” who must be deprogrammed in order to save the nation as we know it, the numbers just don’t substantiate their claim that they are inherently violent.

Those of us who’ve attended Tea Party rallies since 2009 have observed consistencies. They were mostly attended by older demographics including senior citizen retirees and children; hardly the make up of the violent prone. Police were on scene as is the custom with any large gathering and more times then not, they were chillin’ near their cars, smiling and being thanked by rally-goers for their time and service.

NONE of them were disruptive, destructive or violent.

While there have been a few incidents that the media tied to the Team Party, Tea Party rallies have not (as far as I can tell) been involved with any arrests, any allegations of violence or any run-ins with law enforcement.

The Occupy movement has not been so lucky. The number of arrests made at Occupy movements seems to be near 2,500 and still growing. There have been many times when police officials felt compelled to react and control the crowd (most notably in Oakland, as one HeadCount blogger has discussed). Perhaps worst of all, there have even been reports of sexual assault at Occupy events.
— Headcount.org

At least 5,513 Black Lives Matter protests and other demonstrations have been held in the past 2,398 days.
— elephrame.com

And there’s a distinct difference between BLM protests and Tea Party/conservative rallies.

The Armed Conflict Location & Event Data Project (ACLED) analyzed more than 7,750 Black Lives Matter demonstrations in all 50 states and Washington D.C. that took place in the wake of George Floyd’s death between May 26 and August 22.

Their report states that more than 2,400 locations reported peaceful protests, while fewer than 220 reported “violent demonstrations.” The authors define violent demonstrations as including “acts targeting other individuals, property, businesses, other rioting groups or armed actors.” Their definition includes anything from “fighting back against police” to vandalism, property destruction looting, road-blocking using barricades, burning tires or other materials”, the report says.
— Time Magazine, 9/5/20

Using the convenient caveat to distinguish the obvious, “mostly peaceful” was deployed by Democrats and their activist media to diminish the wanton disruption, vandalism, damage, injury and death caused almost every time they congregate. 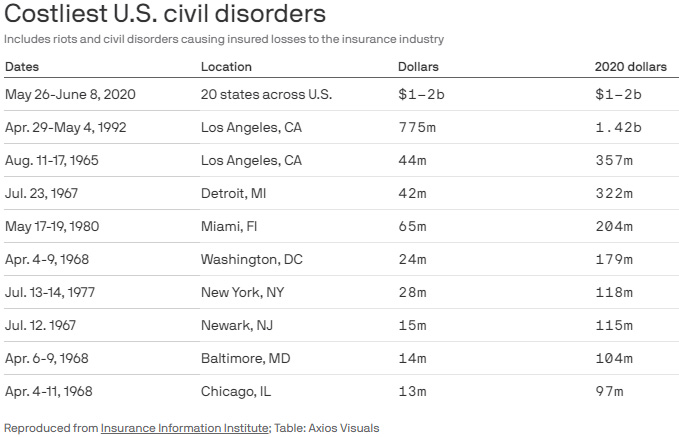 ALL of the above were liberal Democrat riots; not ONE was a conservative, Republican event. In fact, conservatives have the reputation of leaving any area where they’ve gathered cleaner than when they first arrived. Liberal Democrats are the exact opposite.

However, the only instances where violence did occur at Trump rallies was when liberals infiltrated with one sole purpose: to create mayhem, violence and with the gleeful assistance of the media, smear. When the 2016 election produced a result they didn’t like, liberal Democrats took to the streets and the rest is what we’ve come accustomed to.

For the third night in a row, anti-Donald Trump demonstrators took to the streets in several big cities and on college campuses across the United States. About 4,000 protesters assembled downtown Portland late Thursday chanting “we reject the president-elect!” the Associated Press reported. Some among the crowd vandalized 19 cars at a dealership in Northeast Portland, according to a sales manager, Oregonlive.com reports.

The protest was mostly peaceful until demonstrators met with an anarchist group, after which demonstrators vandalized buildings, kicked cars and knocked out power, KGW-TV reported. On Twitter, Portland police said many protesters were “trying to get anarchist groups to stop destroying property” and that “anarchists” were refusing to do so. Demonstrators repeatedly chanted “peaceful protest.”
— USA Today, 11/11/16

It defies logic that there could be no “arrests, any allegations of violence or any run-ins with law enforcement” when Republicans gathered from 2009 through 2021 but one sunny Wednesday in January, Trump supporters decided to run amok and invade the U.S. Capitol in what opportunist Democrats call an “insurrection”. The media selectively turned the normal political speech (how many political commercials do you remember where a candidate says he or she will “fight” for you?) into hate speech.

Trump’s campaign rallies have always been incubation grounds for violence, sites where Trump spewed hate speech that encouraged physical harm against dissenters. And as president, he has used his platform to encourage violence against American citizens, whether through the police and National Guard or militia groups — unless those citizens are his supporters.
— Vox, 1/9/21

Of course, when liberals use violent rhetoric after their supporters commit violent acts, the media looked the other way.

The context is obvious, but imagine where the leftist media would go with such a montage if this were Republicans.

As Biden’s election caused a disruption in their planned disruptions, a January 6 pivot became their next cause…. 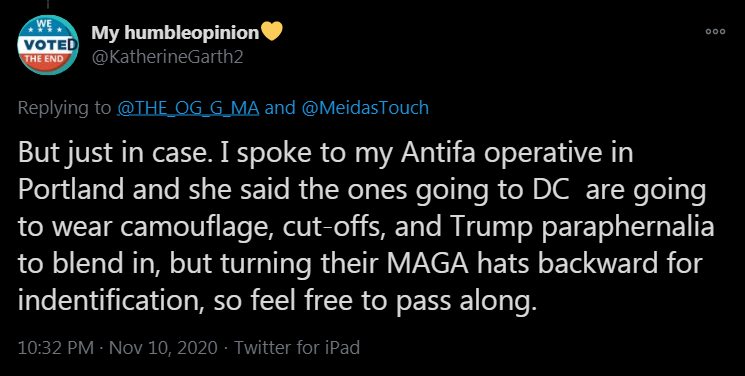 As it’s well documented that conservatives, Republicans and/or Trump supporters are not violence prone and that liberals infiltrate what may have been initially intended to be peaceful rallies and turn them violent and destructive, they plotted before the 2020 election to create “the post-election phase in the streets”.

It’s not beyond sensibilities to assume these people saw the January 6 Trump rally as an opportunity to not only bring on their signature violence but to have that violence blamed on his supporters for future marginalization. It’s just a question who knew what was going to happen and how much blame would be assessed.

There is significant evidence beginning to emerge of three things. One, that the Capitol Police, the NYPD, the FBI all had prior warning there was going to be an attack on the Capitol. How did the leaders of Congress react to this intel? Did it get to them? Did Nancy Pelosi know?

Secondly, if this was a planned attack, you can’t be a president of the United States being accused of inciting a spontaneous attack when it was planned days before. From an impeachment perspective and a factual security perspective, we’re learning things and we shouldn’t be in the posture of making final assignments of blame until we know what the facts are.
— John Solomon, 1/13/21

Again based on the documented reputation of conservative and Republican activists, the January 6 Capitol riot was 100% uncharacteristic of President Trump’s supporters and 100% characteristic when liberal Democrats assemble. Rioting and committing random acts of violence and destruction are things conservatives have never done prior to. It IS what Democrats do almost every time they “peacefully protest” in the streets or storm state houses.

But looking into past patterns and practices just takes too much work for the media and anyone with a modicum of common sense.