This stunk from Day One as pointed out in a previous Skim. Those involved knew how the left would react, and like clockwork, the bait was taken and gleefully consumed.

Ahmed Mohamed, in case you’ve been in a coma and missed this story, brought a clock he had made to school using a circuit board and spot welder. One of his teachers thought the wiry beeping contraption looked suspiciously like a bomb—speaking of cheesy spy movies—and called the principal, who called the cops, because you can never be too careful. The cops asked Ahmed some questions, found him insufficiently forthcoming, cuffed him and took him out of the school, because, you know, safety first.
— Time Magazine, 9/16/15

Of course, consistency and the left don’t mix, but let’s not forget how justified fear was when we were alerted to the fear caused teachers by a weapon made from a very dangerous piece of breakfast pastry….

A hearing examiner supported the decision of a Baltimore-area school principal to suspend a 7-year-old boy for chewing a Pop Tart into the shape of a gun. But his family’s attorney is reportedly vowing to take the case further if the decision is upheld. Andrew Nussbaum, a lawyer who serves as a hearing examiner for several school systems surrounding Washington, rendered a 30-page opinion Monday and agreed that principal Sandra Blondell of Park Elementary School in Anne Arundel County, Maryland acted properly when she removed the boy from school.
— CBS News, 7/1/14

If anything, this is an indictment of the educational system and those who run it because it’s clear those who felt more threatened by a Pop Tart than a device said to be a “clock” (and because of smartphone and similar devices, how many big stand-alone clocks are being sold nowadays?) are just plain stupid and unfit to be in a school.

Why do we say this?

Try walking past a TSA representative at an airport, a Secret Service officer near the White House, or any network television security desk with either item and see which one attracts more attention. And speaking of the White House and one who wants it…. 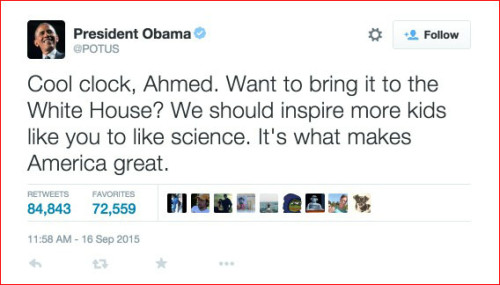 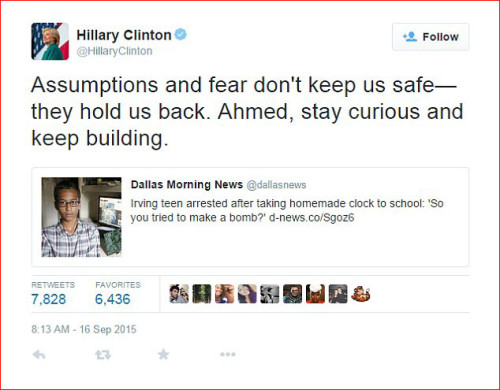 As you all know, we’re no fan of the president and his policies and we’d never wish him physical harm, but think about this: Ahmed Mohamad has been invited to bring his “clock” to the White House. As Time Magazine made reference to “cheesy movies”, wouldn’t this be a great opportunity (thanks to political correctness) to bring an actual explosive device that wouldn’t be checked upon entry? 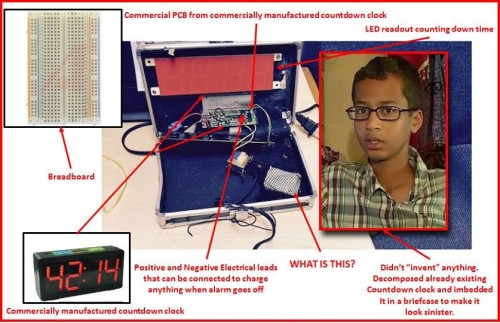 One trifling point: how many traditional clocks countdown to zero? 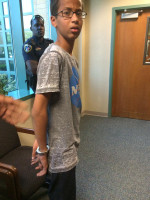 Thanks to society’s admiration and/or fear of all things “social media”, Ahmed Mohamed has become this reluctant hero to the online sycophants who still have this need to be a part of something they didn’t create.

The hashtag #IStandWithAhmed has been taking over Twitter. Besides Barack Obama, celebrities, leaders, and figureheads have supported Ahmed Mohamed through various social media platforms. Today, Texas police decided not to charge the Texas teen arrested for bringing a homemade clock to school that police mistook for a bomb.

On Wednesday, the morning after Mr. Mohamed’s arrest, #IStandWithAhmed was trending on Twitter along with an image of the baby-faced 14-year-old, who looks confused, handcuffed with a police officer in the background. 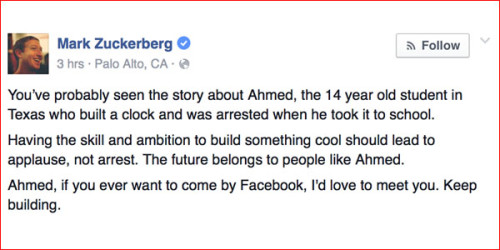 Yes, young Ahmed had no idea what he was stepping in…

I closed it with a cable, ’cause I didn’t want to lock it to make it seem like a threat, so I just used a simple cable so it won’t look that much suspicious.
— Ahmed Mohamed, NBCFW.com

Interesting choice of words for someone who didn’t seek to bring attention to himself or a cause, and certainly not exploit for monetary gain.

On Monday, 14-year-old Mohamed was arrested for taking a homemade clock to school that his teachers thought was a bomb. So crowdfunding platform LaunchGood started a campaign to raise $100,000 for the Muslim teen. In just one day, the site had raised over $10,000 from more than 200 backers. It’s hoping to raise $100,000 by October 1.

For such an innocent misunderstanding, Ahmed sure it getting a lot of attention.

Dallas Hackers Are Already Helping Ahmed Mohamed with His Next Inventions
Teen clockmaker gets offers from Twitter and MIT – and a T-shirt from space
Bruce Fenton Promises $250,000 Scholarship For Clock Making Teen Ahmed Mohamed

And the CAIR was never too far from the mix.

Council on American-Islamic Relations Dallas-Fort Worth chapter executive director Alia Salem told the Daily Beast while being questioned in the principal’s office, police officers refused to honor Mohamed’s requests to speak to his parents, but instead searched his bags and confiscated property. The Dallas Morning News reported he was also threatened with expulsion.

Going back to one of our first points, how many of those detained by school and later law enforcement authorities were allowed to call parents and/or lawyers during their initial detention and was this ever an issue? But when we’re talking about the left and their pets, it’s never about equal treatment; it’s always about special treatment. 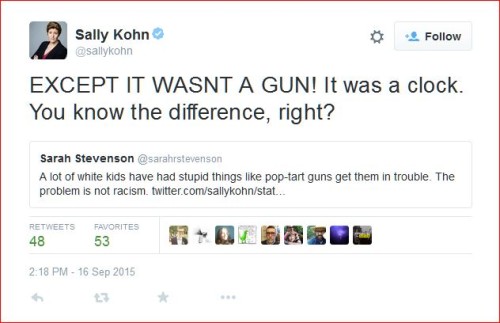 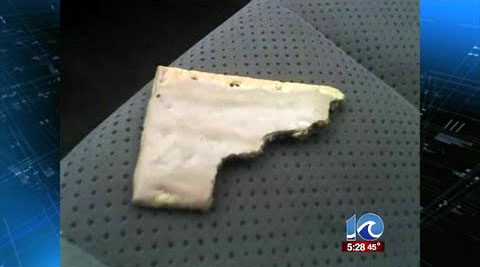 Yes we do and the chances of survival of an attack by a Pop Tart gun and a Muslim with a wired device are quite the difference, but the school authorities didn’t know that, right Sally?

Muslims are embraced and heartily welcomed into all cultures they wish to enter because they are the dictionary definition of people who assimilate and humbly embrace the traditions of the cultures they move into. Anyone whose Islamophobia won’t let them accept these truths deserves all the nasty names they can endure, so there!