The employees at Everyday Deals Extreme should have conducted themselves in a more professional manner and the discipline was appropriate, however apologies to the customer should also have been handled differently as she clearly exaggerated the abuse she claims she endured.

The employees in question should have never left the store to respond further. Heather Franklin, whose self-recorded video of her hysterical pleas to the employees not to approach her is contradicted by the same video showing said employees approximately 50 yards away and not impeding her ability to drive away. But because she’s a poor, helpless, crying woman with a child, her dubious word was accepted.

Progressive activists take to the streets, commit acts of wanton vandalism and physical assault, and those on the opposite side politically are supposed to sit back and accept the First Amendment-protected insults and taunts. 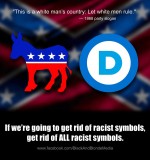 The Confederate flag is an offensive symbol to some and a revered reminder of heritage to others. It should not be removed from sight as the left demands because that flag was also a proud banner of the Democrat Party and their legacy of historical racism towards black people. While Jews consistently remind us we should “never forget” about the Holocaust, Democrats should not be allowed to whitewash their imprint on American history under terms they now dictate.

The opportunists took advantage of the situation as the Direct Action Alliance organized a protest against incivility, complete with music that included YG & Nipsey Hussle’s “FDT” (Fuck Donald Trump). It’s unclear how the president was involved with the incident in Portland. 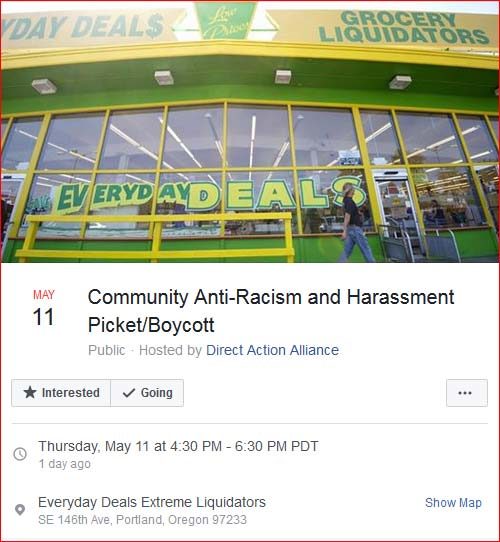 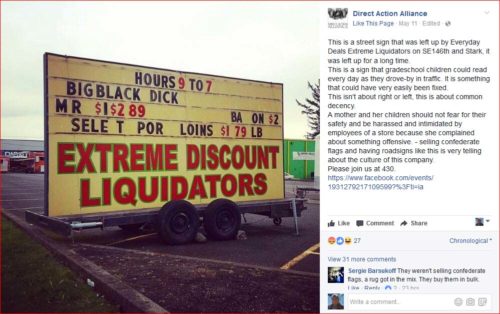 Who routinely defaces property and/or instinctively creates racist hoax narratives to “raise awareness” and we wonder if the store’s CEO would be so apologetic after seeing a pic on Facebook of a sign he obviously wouldn’t condone and no one in his store altered? Have you noticed the left’s first impulse is to insult, thus enrage black people?

Most reasonable people see things everyday they deem offensive. We personally shake our heads every time we see Obama-Biden or Hillary bumper stickers. Do we follow those cars so we can verbally berate them? No. We don’t allow our emotions to overwhelm common sense and civility and that’s what contrasts people like us from the Heather Franklins and the “Direct Action Alliance“.

She intentionally ramped things up to the next level and achieved the victim status attention desired.