As someone who actually managed a video news department, I would have had some very harsh things to say to Ben Jacobs had he worked for me, but we’ll get to that later.

In an apparent last-minute attempt to throw the Montana special congressional election to the Democrat, we have a former Democrat operative-turned “reporter” who attempted to create a Michelle Fields-style drama incident into a Republican loss… it didn’t work in 2016 and it didn’t work last night in Montana.

After hearing the entire audio of the incident, not just the clearly-edited 45 seconds released to the public and prior to getting all emotional and offering comforting words, there are a few things that would have been asked.

The account from people who were actually in the room is kinda’ shaky.

Faith, Keith and I arrived early to set up for the interview in a room adjacent to another room where a volunteer BBQ was to take place. As the time for the interview neared, Gianforte came into the room. We exchanged pleasantries and made small talk about restaurants and Bozeman.

During that conversation, another man — who we now know is Ben Jacobs of The Guardian — walked into the room with a voice recorder, put it up to Gianforte’s face and began asking if he had a response to the newly released Congressional Budget Office report on the American Health Care Act. Gianforte told him he would get to him later. Jacobs persisted with his question. Gianforte told him to talk to his press guy, Shane Scanlon.

Unless a newsmaker is on a public street, it’s journalistic protocol to set up the time and place for interviews in advance which is what Fox News did. I would have counseled a journalist for barging in and interrupting another news entity’s prearranged interview. That’s when you patiently wait your turn as the candidate requested.

Not sure where the Fox News crew was in the gear set-up, but if a ruckus was starting, video cameras should have been rolling. And we all know if there was video, we would’ve seen it before the polls opened. That is if the video met the desired election result, not to say Fox News had chosen sides, right Shep?

Ben Jacobs rudely violated journalist protocols, interrupted and violated the space of another news organization’s prearranged time with a congressional candidate, all because HE wanted that candidate to drop everything and address HIM.

To be clear, at no point did any of us who witnessed this assault see Jacobs show any form of physical aggression toward Gianforte, who left the area after giving statements to local sheriff’s deputies.
— Alicia Acuna, Fox News, 5/24/17

Jacobs violated the very first thing my very first civilian editor told me after I was hired: “It’s the job of the media to report the news, not incite it” while Ben is milking it for all he can.

Reporter Ben Jacobs of The Guardian said he’s still in shock after Greg Gianforte, the Republican candidate in Montana’s special House contest, allegedly body-slammed him on the eve of the election, which is being eyed nationally.

While we don’t believe he expected the response received from Greg Gianforte, Jacob’s over-the-top whining about his broken glasses was as pathetic as Michelle Fields and the phantom bruises she supposedly received from then-Trump campaign manager Corey Lewandowski. The video didn’t match the allegation and as we hear no thump and/or smacks that would have been clearly audible had Jacobs received a “body slam” and punches, taking the word of a media that makes news on sources that can’t be verified is problematic at best.

Thankfully, we haven’t heard much from Fields since. One can only hope karma repeats on skinny-jean Jacobs.

But again, it’s all about poor Ben. 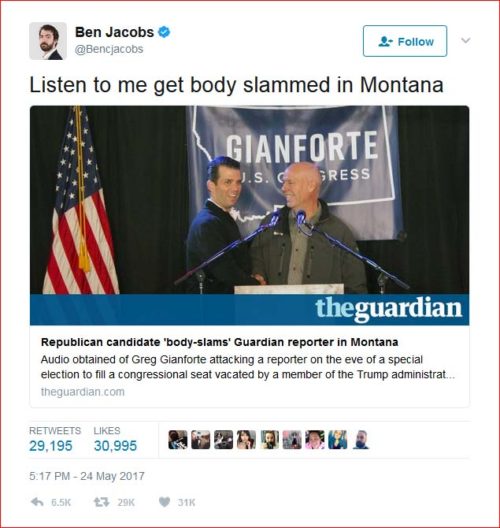 This is where you’re supposed to audibly gasp; women clutch the pearls! Michelle Fields, via the New York Times opinion page, had to have her “Look at ME!” so she could get in on the action. 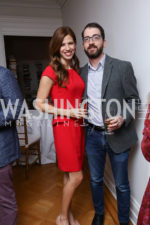 Ben is a friend of mine, who stood up for me when I was grabbed and bruised by one of Donald Trump’s campaign managers, Corey Lewandowski, during the Republican primary.

His assault was far more brutal than mine — and given the report from Fox News journalists in the room, he understated the violence. But like Ben, I faced skepticism and accusations. Despite the fact that there was audio evidence of my attack and a Washington Post reporter had witnessed the incident, many conservatives said I was lying. When video came out proving my account, those who labeled me a hoaxer changed their tune to suggest I deserved what I got.
— Michelle Fields, Journalism in the Age of the Body Slam, 5/25/17

Jacobs is just another example of the party operative class seeping into the media where clearly partisan reporting can be substituted for what is supposed to be unbiased news. He appears to have wanted to be in the middle of that last-minute got’cha and derail a Republican on the eve of an election.

Not surprisingly, this is now about raising awareness-turned a fundraising opportunity for a progressive nonprofit… in the name of persecuted “journalists”. 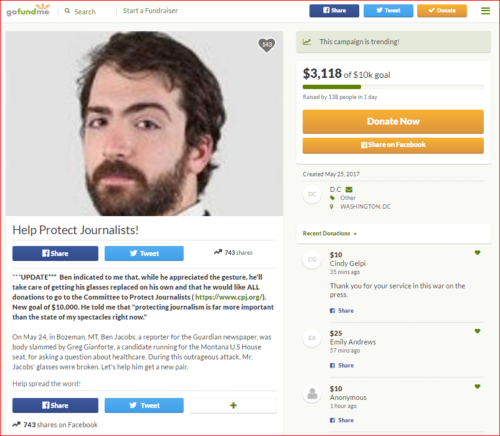 Not that it’ll happen given the current crop in the business, but someone needs to tell these pussified millennial reporters that there’s something called manners, a concept their parents clearly didn’t teach them, and just because you have a press badge doesn’t mean a subject is obligated to respond to you immediately so you can meet an arbitrary deadline and get to the nearest bar early.