Whether we’re talking current or has-been actors, late night talk show hosts, partisan politicians or a presidential loser, the entitled opportunists are chiming in on the latest tragedy in Las Vegas and calling for gun control, again.

Michael Moore: Why the U.S. Has Trouble Effecting Change in Gun Laws

Let’s not blow off how many of these celebrities have made millions of dollars in productions where they’re depicted shooting off dozens of rounds from cool-looking, exotic weaponry and killing the many people who had it coming.

That lasted about a week and while celebrities will take time from their important schedules to lecture us about the scourge of gun violence in America, the Hollywood body count grows in proportion to their bottom lines.

From Sept. 22-28, the four top live-action movies — Kingsman: The Golden Circle, American Assassin, It and mother! — contained 212 incidents of gun violence, 108 of them involving automatic weapons similar to the ones used by Las Vegas shooter Stephen Paddock.
— The Hollywood Reporter, 10/10/17

And they sure make gun violence look pretty.

Of course, those who create and are paid handsomely to participate in Hollywood body counts are the first to absolve themselves of any responsibility for any actions their television shows, movies and/or video games may inspire.

It’s absurd for a movie director or game designer to say, “This is just entertainment; it doesn’t mean anything.” And just as television and movies can affect how we think about love or work or death or beauty, they might be able to change how we think about violence, which is why those who produce our culture should be as thoughtful as possible about all the messages they send.
— Paul Waldman, Washington Post opinion writer

Any media outlet that recites there’s no evidence to back up the assertion that violent sensory overload of onscreen violence doesn’t desensitize thus may inspire consumers to carry it out, is probably owned by a corporation that produces and distributes them. Any admission of responsibility could open them up for numerous, massive lawsuits (which is why no entertainment company will EVER make such a declaration).

The news and information media should acknowledge the proven scientific connection between virtual violence and real-world aggression and the current consensus of credentialed experts in this field and should avoid equating unscientific opinions and industry marketing tracts with peer-reviewed and vetted scientific research.
— American Academy of Pediatrics, 10/1/16

Some scientific consensus’ are given more credibility than others.

Gun control is never a political talking point in need of another national discussion when the body count gets into the dozens in black neighborhoods over a weekend in a gun-controlled Democrat district, or even when a Republican congressman is shot during a baseball practice by a Bernie Sanders supporter.

What’s most hypocritical is that those using Las Vegas as a rallying cry for gun control are some of the most protected people in the country; celebrities who consider themselves more important than “ordinary people” and are most probably shielded by someone with… wait for it… a gun. 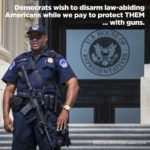 As for our concerned politicians expressing outrage today, they do so within federal buildings with armed guards and metal detectors because they also deem themselves more special than those who are forced to pay for their salaries and protection.

Oscars Security: LAPD Will Have Over 500 Officers On Hand at Red Carpet
More than 500 officers will be on hand, many of them working overtime, to ensure the safety of the 90th Academy Awards, along with firefighters, police helicopters and agents from the FBI. Private security guards from Security Industry Specialists will work the inside of the theater.

The city of L.A. bills the Academy of Motion Picture Arts and Sciences for security, street closures, and other expenses related to the event. This year, the cost is $340,000, up from $300,000 for the last several years.

We’re patiently waiting for the first noble celebrity to announce he or she has disarmed a bodyguard to show they are going to abide by what they’re calling for the rest of us to live with… at taxpayer expense.