It’s extremely timely, given the left’s hatred of President Trump, to make the whole Harvey Weinstein-Hollywood sexual abuse thing about men in powerful positions taking advantage of poor, innocent women who were just trying to make it in the business. But when we’re talking about Weinstein just being the tip of the iceberg, let’s not buy into that floating mass just being composed of testosterone. 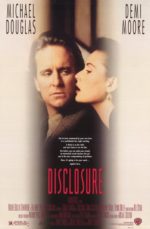 One of his more negatively-received adaptations was the 1994 movie “Disclosure” which explored the topic of an executive who sexually abused a subordinate. The movie was considered controversial because of the highly-implausible premise that the abuser was woman and the abused was a man.

Just what was Crichton really telling us and why did it strike a nerve enough to earn that standard progressive, deflective dismissal? 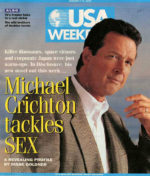 At that point in time, Michael Crichton was more than just a Hollywood insider. He rode among the rich and powerful and one could argue “Disclosure” was his way of speaking out like many women today are being applauded for. Without naming names, he may have been trying to out powerful, predatory women. They’re out there and like the Harvey Weinstein scandal, he knew he couldn’t count on the media to alert the public that this abusive behavior even exists.

Just wait for that first male to air the dirty laundry. The abuser may be a woman or some version of LGBTQ so let’s see just how ahead-of-his-time Michael Crichton really was.

As that and much more was largely blown off by the media and those now “woke”, fast forward to post-Harvey Weinstein revelations and obvious hypocrisy…

Former child actor Blaise Godbe Lipman, 28, says agent Tyler Grasham assaulted him 10 years ago when he was seeking representation. “Tyler Grasham, under the pretense of a business meeting regarding potential agency representation at APA Agency, fed me alcohol while I was underage and sexually assaulted me,” he wrote Monday on Facebook.
— Deadline

Previously, Deadline reported that Grasham had been suspended from the agency, which was investigating allegations of sexual misconduct from former actor Blaise Godbe Lipman and television editor Lucas Ozarowski. A prominent client of Grasham’s, Stranger Things star Finn Wolfhard, fired him Friday as well.
— The Advocate

GLSEN (the Gay, Lesbian and Straight Education Network) held its annual Respect Awards in the ballroom of the Beverly Wilshire on Friday night, where the Harvey Weinstein scandal prompted many out gay actors to speak openly about inappropriate behavior they had experienced with Hollywood power players.
— Variety 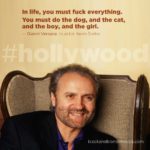 Actor Kevin Sorbo alleges that he was sexually harassed by the late Italian fashion magnate Gianni Versace when he was working as a model decades ago.

“All of a sudden, his hand goes up my leg,” says Sorbo. “Dude, you know I’m straight?” he told Versace. “This is why I like you. You’re not a girly man. You are a man’s man,” Versace told Sorbo, according to his recollection.
— Hollywood Reporter 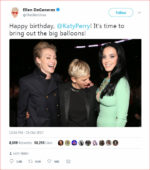 How about a powerful woman who IS gay?

Comedian and daytime talk show host Ellen DeGeneres is receiving some backlash from fans after a joke about Katy Perry was taken as sexist. The star courted outrage on Wednesday after dedicating a tweet to the “Roar” singer on her birthday.

“Happy birthday, @KatyPerry! It’s time to bring out the big balloons!” the star wrote over an image of her gawking, mouth agape, at Perry’s breasts.
— Fox News

It’s not like this is the first example of the sanctimonious Ellen laughing about the same “balloons” a man would be crucified for today.

In an interview with BuzzFeed News, actor Anthony Rapp is publicly alleging for the first time that in 1986, Kevin Spacey befriended Rapp while they both performed on Broadway shows, invited Rapp over to his apartment for a party, and, at the end of the night, picked Rapp up, placed him on his bed, and climbed on top of him, making a sexual advance. According to public records, Spacey was 26. Rapp was 14.
— BuzzFeed 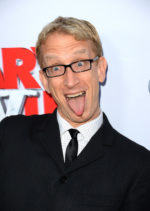 Andy Dick has been dropped from the independent feature film Raising Buchanan following accusations of sexual harassment and misconduct on set. The Hollywood Reporter was not able to reach any of the alleged victims, however, two sources detailed Dick’s inappropriate behavior, which included groping people’s genitals, unwanted kissing/licking and sexual propositions of at least four members of the production. “I don’t grope people anymore. I don’t expose myself anymore,” he said by telephone. “I do understand that the temperature in the world right now is delicate.”
— Hollywood Reporter, 10/31/17

After all of the loud noise, belatedly being made about sexually abusive men on poor, innocent, unsuspecting women who (in many cases) accepted a check for their silence, compare that to the relative silence when women and gays are the aggressors.