Educators, kindergarten through college, are in a unique position with enormous power thus responsibility.

One would think a competent educator would present all sides of an issue and allow the critical thinking process to develop in the young minds of their students. However, that is NOT what occurs in the classrooms across the United States of America.

We’re talking about a massive industry (mostly taxpayer-funded) that’s an incubator for one political party and ideology. Instead of giving students the opportunity to formulate their own opinions, free from intimidation and threat of a potential failing grade just because he or she may not agree with blatantly partisan presentations, today’s academia is an involuntary breeder for the Democrat Party.

While there are 10 Democrats for every Republican among professors over the age of 65, the ratio balloons to 22.7 to 1 among scholars under the age of 36, indicating the ideological disparity could continue to grow as more senior professors are pushed out and replaced by a new generation of scholars.
— Washington Times, 10/6/16

On rare occasions, we’ll hear professors and administrators whining about students on campus issuing demands and even questioning their authority. The phrase “eating their own” happens too infrequently to be of any real consequence even though it’s briefly entertaining.

Teachers have our children, on average, from 175-180 days out of the year. They are the only people to whom we send our children on an almost daily basis and have no idea what they’re being told behind our backs. Some states even have policies where teachers can help their students to do things (like get an abortion) without the knowledge or consent of the parent that may not think it a good idea.

There was a time, seemingly long ago, when we assumed only the best and brightest were brought into classrooms to teach. Most teachers love their job.

Whenever we see young people behaving badly, it’s always easy to blame parents and more times than not, it is a reflection of bad parenting. But if you think about it, who do children really spend most of their waking hours with? It’s not the parents but with teachers and now these young intolerants are the ones who’ll be forming public policy on a generational basis with the limited thinking they were taught to accept and now bully the public with.

Despite our always being told by teachers that their priority is “the children” and it’s not about the money, they are the first to strike for more pay and by doing so, leave millions of parents scrambling for sitters on short notice as to keep their young ones off the streets unsupervised because taxpayer-funded schools are closed due to strikes. 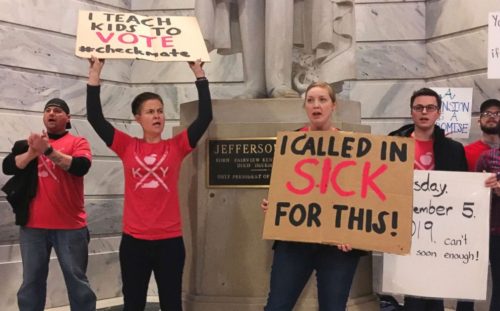 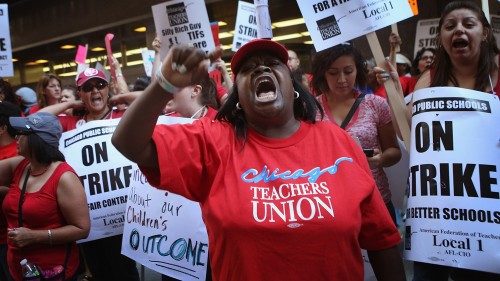 2018: Teachers are striking all over. What is going on?

Questionably-qualified, partisan academics are the greatest threat to America because the children they’re unleashing on the world are only as good as how they were taught.

But they know a whole lot about sexual orientation and at a very young age.

Students may not be able to read, write, and do basic math well but they can tell you how evil white people are, identify all the evolving genders, protest in the streets while not fully knowing why they are protesting, and defy basic standards of decency because they only know what an agenda-driven teacher “taught” them.

A new YouGov poll asked more than 1,000 people aged 14 and up about their knowledge of the country’s history and institutions, and their patriotic feelings toward the U.S.

Basically, it found younger generations — millennials (age 22-27) and Gen Z (age 14-21) — are less likely to love and respect the country. And they’re less informed about American history, and way more likely to embrace socialism. Is that just evidence of youthful ignorance? Or is it the result of a school system that indoctrinates children in leftist ideology?
— Investor’s Business Daily

If teachers aren’t the greatest threat we as a nation face, who and/or what really is?