In Mass., #FalseRapeAccusers are Given Protected #MeToo Status

I fairly recently received a rejection for employment, however I was never given a reason aside from there being something in my background that raised a red flag. There was an “incident” decades ago but seeing how I passed a CORI check so I could teach video production to middle school students in Massachusetts in the early 2000’s, I always assumed that incident was a non-issue.

That “incident” was a false rape accusation and for precaution-sake, I reached out to the Brookline Police Department to find out if there was anything lingering that may have reared its ugly head. 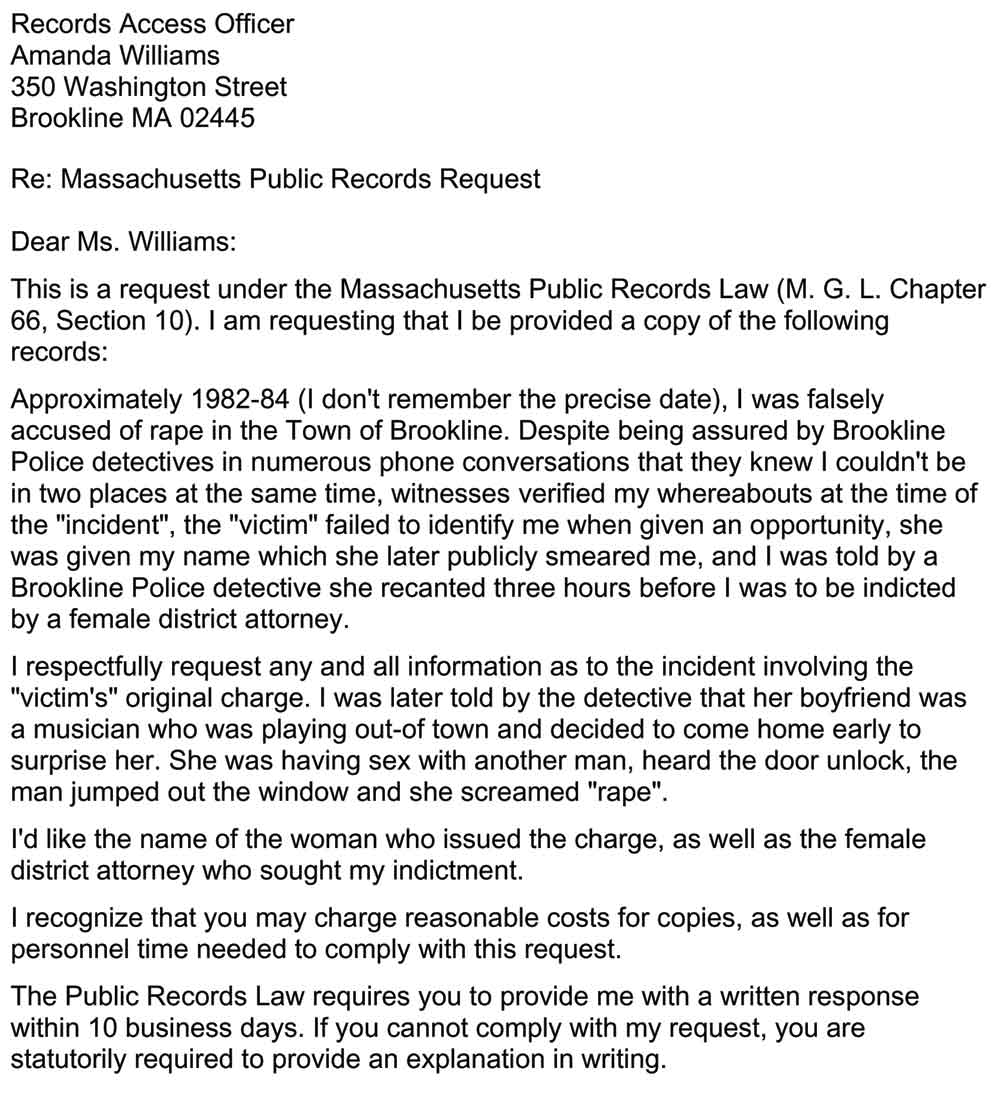 I received the following response from the Town of Brookline. 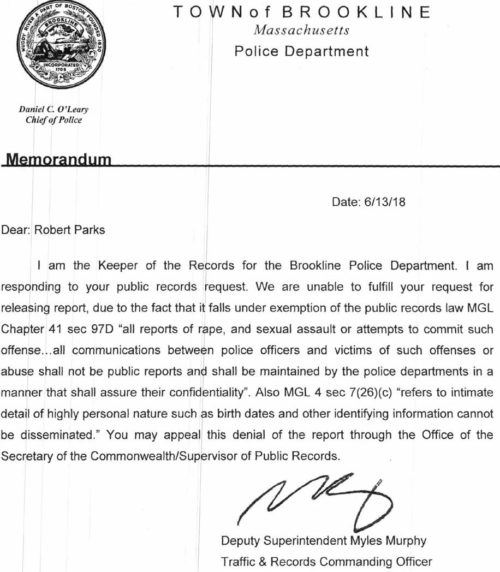 The “victim” filed a police report of rape and valuable man hours were spent investigating. For some unknown reason, the “victim” was given my name and she subsequently referred to me personally as her attacker.

A very nice Brookline police detective called my place of employment numerous times via the company switchboard (there were no personal smartphones at the time) and identified himself as such, which obviously created unwanted drama. He, on numerous occasions, assured me he knew I didn’t commit the “rape”. He told me he personally interviewed the bartender who knew me at the corner bar I frequented, as well as other patrons who knew me and confirmed my presence there at the time the “rape” was supposed to have occured.

During one such phone conversation with the detective, I was warned to be careful in the Town of Brookline because the boyfriend of the woman (who it turns out was cheating on him while he was out of town) made public threats that he was going to shoot me for raping his girlfriend.

The detective also gave the white “victim” an opportunity to identify me in a public place and once there, failed to do so. A white female district attorney (who obviously believed that women NEVER lie about rape) proceeded to pursue a criminal indictment. I was later told by the detective on the phone that I was three hours from being indicted for rape when the woman suddenly recanted her charge and the matter was dropped.

But the damage was done and I was later fired from my job due to mistakes made due to the stress making it hard to concentrate, as well as the numerous phone calls by police during my work hours.

The “victim” was allowed to just walk away, despite the female district attorney being made privy to information proving my innocence and still aggressively pursuing my prosecution.

Massachusetts prosecutors have violated defendants’ rights to a fair trial regularly and without punishment, even as wrongfully convicted victims of tainted prosecutions have spent years in prison before being freed, decades of court rulings show. Some prosecutors failed to turn over important evidence to defense attorneys or didn’t disclose information bearing negatively on witness credibility, judges said. Others misrepresented evidence in their closing statements to the court.

I attempted to appeal the denial of the public records of this incident with the Massachusetts Secretary of State’s office as instructed and was again denied because the identity of the “victim” had to remain protected and confidential. 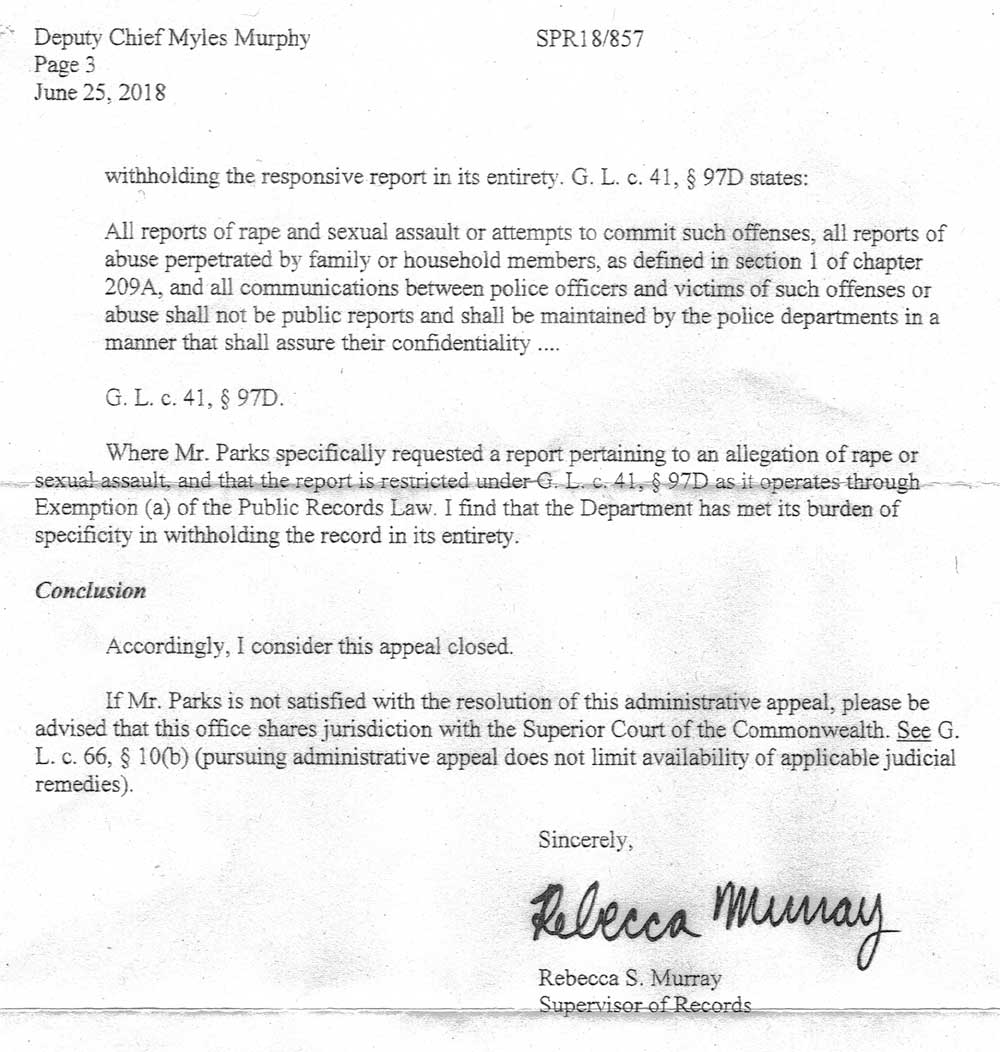 So, what’s the conclusion here?

If you are falsely accused of rape in Massachusetts, the false accuser is considered the “victim”, NOT the person who filed a false police report, which incidentally IS a crime.

Whoever intentionally and knowingly makes or causes to be made a false report of a crime to police officers shall be punished by a fine of not less than one hundred nor more than five hundred dollars or by imprisonment in a jail or house of correction for not more than one year, or both.
— Section 13A: False reports to police officers

If you are falsely accused of rape in Massachusetts, you have no access as to what was reported about you, the ability to contest the accuracy of what is in that police “record”, knowing who made the false allegations against, no say in who gets to see that “record” if requested, and how long that “record” will remain active. If there’s no statute of limitations regarding rape, then that false accusation “record” could be maintained indefinitely.

The fact the Town of Brookline has denied my request to see any or all information regarding the incident in question implies a “record” IS in existence and accessible should the right person ask.

The fact a false rape accuser can achieve “victim” status in Massachusetts is something every male in the Commonwealth should be concerned about as their lives can be ruined; not only can the false accuser walk away, but Massachusetts will make sure that false incident comes back to haunt you and the person who ruined your life will get on with hers just fine.

False rape accusations: Why must we pretend they never happen?

This is the reason why I’m highly suspicious whenever I hear or read about any sexual assault incident.

Please contribute to my GoFundMe as I attempt to rectify a situation I didn’t create and stop this from happening to anyone else.