White-Hollywood Guilt: How Many Minorities Has Ellen Pompeo Hired?

There are millions of Americans who work hard every day. They put a lot of time, wear and tear on their bodies just to put food on the table for their family members, and that’s before having to absorb the cost of clothes, utilities, car payments and more. Many of those Americans live from paycheck to paycheck and have no idea what their financials will be next week, let alone a year from now.The entertainment industry pays itself very well for what they do and devote lavish ceremonies to make sure we know how good they believe they are at what they do. While many in Hollywood are humble and don’t flaunt their wealth, over the years we’ve seen too many white-guilt multimillionaire “stars” lecture us on how we need to do more for the downtrodden while they personally do little themselves… except talk.

People online and all over the world are cheering on actress, producer and now activist Ellen Pompeo after she called out a crew in the middle of an interview for not being diverse enough. And while she said there were a lot of women in the room, the “Grey’s Anatomy” star was disappointed with the lack of color behind the lens.
— ABC News, 11/20/18

It’s like this is the first time Ellen Pompeo ever walked into a network television lobby, or newsroom, photo shoot or Hollywood set and the majority of minorities she sees are security guards and cleaning crews, those carrying the heavy video cameras on live remotes, not to mention those who maintain the opulent properties of her and her friends. But she tries to come off like she’s moved and really cares.

Ellen Pompeo could’ve done more and insisted on the hiring of more qualified minorities on her productions IF she really wanted to; IF it even came to mind.

Ellen Kathleen Pompeo (born November 10, 1969) is an American actress, director, and producer. She is one of the highest paid television actors, having signed a $20 million annual contract with the American Broadcasting Company in late 2017. She was honored with the 2007 Special Achievement in Entertaining by the National Italian American Foundation for her contributions to the entertainment industry.

Pompeo was then cast in ABC’s popular medical drama Grey’s Anatomy, and garnered worldwide recognition for her portrayal of the title character Dr. Meredith Grey. The role on the long running series earned her a Golden Globe nomination and a Screen Actors Guild Award. The character became widely popular, making Pompeo one of the most renowned television actresses. In 2016, Pompeo was ranked fourth in the list of highest paid TV actresses by Forbes, with earnings of $14.5 million; she became the third highest paid female and the fifth highest paid actor overall in 2018 with earnings of $23.5 million. She was also the highest ranked actor from a drama series on the list.
— Wikipedia

It’s so easy to bravely speak out against Hollywood after you’ve gotten yours.

Do an online search and aside from her husband and children, do you see Ellen Pompeo pictured around minorities? Not much. Has she ever boasted about the minorities in the productions she’s been involved in that’s made her millions? No.

Hollywood celebrities are constantly looking for attention they can monetize. They hire publicists who do nothing but plot how to garner positive press for their clients.

And let’s not forget: Ellen Pompeo is an actress. 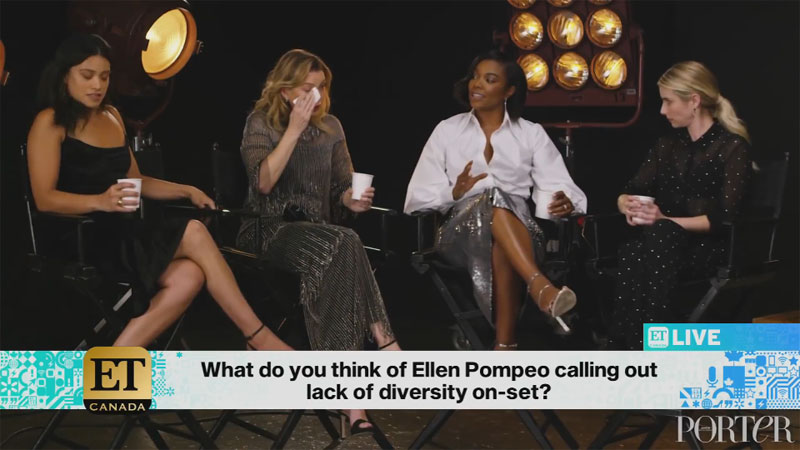 Liberal Hollywood is a notoriously racist industry and has been documented as such on numerous occasions. The fact some still believe they can act all shocked about the roaches in their custom-made cabinets is nauseating.

“As Caucasian people, it’s our job. It’s our task, it’s our responsibility to make sure we speak up in every single room we walk into. It’s our job because we created the problem,” she added.

There are many who could do much more to open the door for people who just want an opportunity to compete and not have to be relegated to positions those in control tolerate them to be placed in.

Ellen Pompeo now feels better about herself because she knew how her words would be taken, had a convenient hankie handed to her, and social media is “cheering” her today.