Give ’em an inch and they think they’re rulers. 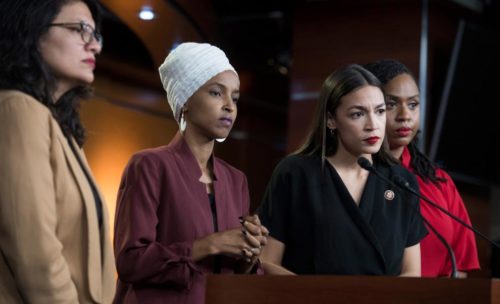 Not sure who originally said that but it accurately illustrates the enabled egos of four freshmen Congress “women of color” who were elected to a legislative body and decided they were suddenly qualified to run the place. They believe their social media lemmings support their personal agendas and any opposition is to be met with the very bully tactics they claim is being imposed on them.

Saying he was personally offended at the suggestion, the long-tenured member of the Congressional Black Caucus said Thursday that Ocasio-Cortez and three fellow progressive freshmen women who call themselves “the Squad” were lashing out because “they didn’t get their way” as the tensions between the old guard of Democratic leadership and the young, assertive lawmakers with outsized social network presences exploded into public view.

As Clay—who has been targeted for a primary challenge by Justice Democrats, the group that propelled Ocasio-Cortez’s campaign—went off on the group, his colleagues rallied to Speaker Nancy Pelosi’s defense. But for Democrats like Rep. Pramila Jayapal (D-WA), a co-chair of the Congressional Progressive Caucus, Ocasio-Cortez’s comments resonated. “I don’t think the speaker is used to having a group of members who has bigger Twitter followings than her,” she told Politico.
— Daily Beast, 7/12/19

So, the chickens came home to roost within the party that consistently exploits the race/gender card, a senior black congressman is being targeted by narcissistic rookie Democrats, and now they needed a way of diverting attention away from the accusations of internal racism (seeing how socialists traditionally never had much use for black people and that appears how things are shaking out now).

There is, in other words, a growing assumption among racial justice advocates that more socialism would result in less racism and, even, that socialism is, in itself, anti-racist. There is, in fact, no such necessary connection between socialism and anti-racism, as a closer look at early socialist writings amply shows.
— Foundation for Economic Education, 11/14/17

Do a quick search and aside from fellow “Squad” members, how many pics of them do you see of them with “people of color”? You won’t see many (outside of the necessary 2018 campaign stumping). 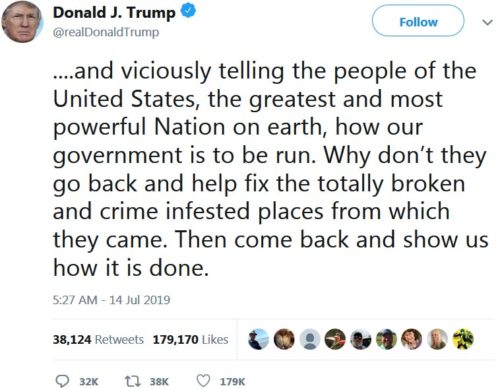 Of course, the president’s quote would fall into the bias-by-omission column and the selective “why don’t they go back” phrase was complemented with a uniform message for his supporters.

Trump Is a Racist. If You Still Support Him, So Are You.

Progressive women almost always tout their brains and strength, that is until (like most liberals) their ideas are challenged. Then they either refuse to debate their ideas or make themselves the victim. Having a social media megaphone makes the latter a direction that requires the least amount of gray matter.

With the benefit of a friendly, liberal media that very seldom factchecks Democrats, Omar, Pressley, Ocasio-Cortez and Tlaib knew they could say anything they wanted about President Trump and be unchallenged for accuracy.

But again, this was not a genuine attack on the president based on anything he put out on social media but yet another Democrat bait-and-switch; this time to deflect from their targeted, internal racial division. These four loose cannons (led by @AOC whose Justice Democrats) are targeting current officeholders who aren’t enthusiastically onboard with HER agenda, and when black Democrats are targeted from within and fingers can’t be pointed at evil Republicans, there is an optics problem.

So it’s time to do what Democrats do best: create a problem and then demand a Republican assume the responsibility and fix it while they sanctimoniously criticize the suggested solutions. For those who whine about having too much work, calling someone a racist is much easier.