Milano-Cruz Summit: The Civility and Condescension of Close Proximity 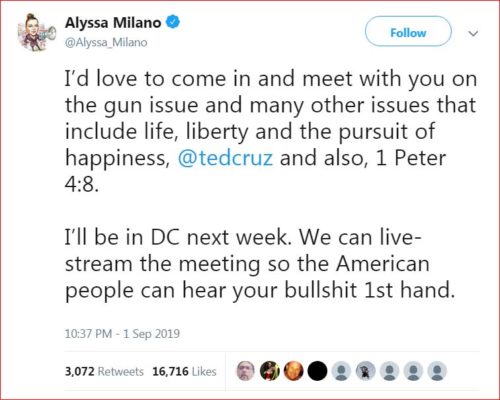 Had any of us used similar verbiage, the request to meet with a United States senator most probably would’ve been turned down, but we are talking about the expectations of self-appointed Hollywood royalty who are used to belittling others while getting their way. 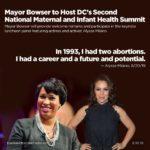 So Milano was granted a meeting with Senator Cruz, as she was also slated to be in the District for a summit luncheon with Mayor Muriel Bowser. After all the insults by Milano, she showed up in the senator’s office… with two others for support.

There was even a Facebook live stream, as the unlikely pair met on Capitol Hill, along with Fred Guttenberg, whose 14-year-old daughter Jamie was killed at Marjory Stoneman Douglas High School in the Parkland, Fla., mass shooting. Guttenberg has since become an activist on the issue of gun violence.

Tuesday’s meeting was also attended Ben Jackson, co-founder of #NoRA, an anti-NRA organization “inspired by the Parkland shooting,” according to its website.
— USA Today, 9/10/19

The duration of the video that was live streamed came out to around an hour and fifteen minutes, which you can view at your leisure. That is, if you can watch a timid bully who enjoys throwing rocks from a distance have to confront one of her demons less than a yard away. Of the 75 minute video, Milano spoke for roughly ten….

It wasn’t as epic as billed, in fact it was rather boring because the Twitter shields were down. Now, had this meeting taken place in a bar and the camera was turned on after the second round, this could have been extremely entertaining. Instead, Ted Cruz was restrained while Milano came off as condescending, a tad bossy, and relatively unprepared to have a real policy discussion but that was kind of expected.

After Milano left, she just had to take to Twitter and have the last word… behind Cruz’ back while again, lecturing us on “civility”.

I just left. He was gracious. I’m unsure if it changes anything. But appreciative for the opportunity to bridge the divide with civil, meaningful, discussion.
— @Alyssa_Milano Tweet, 9/10/19

It probably won’t change much as upon Milano’s return to Los Angeles, protected by distance, she’ll take aim at President Trump and his supporters, the NRA, Senate Republicans, and the last thing on her mind will be to bridge the divide with civil, meaningful, discussion.