We predicted, based purely on enthusiasm visuals, that not only would President Trump win reelection in a landslide, but Republicans would retain the Senate and possibly win back the House of Representatives. But alas, things didn’t pan out as expected and given the results that did emerge, it defies basic math and reasoning.

Joe Biden was declared the winner of the 2020 presidential election by the media by garnering a record-breaking 79,843,209 votes. 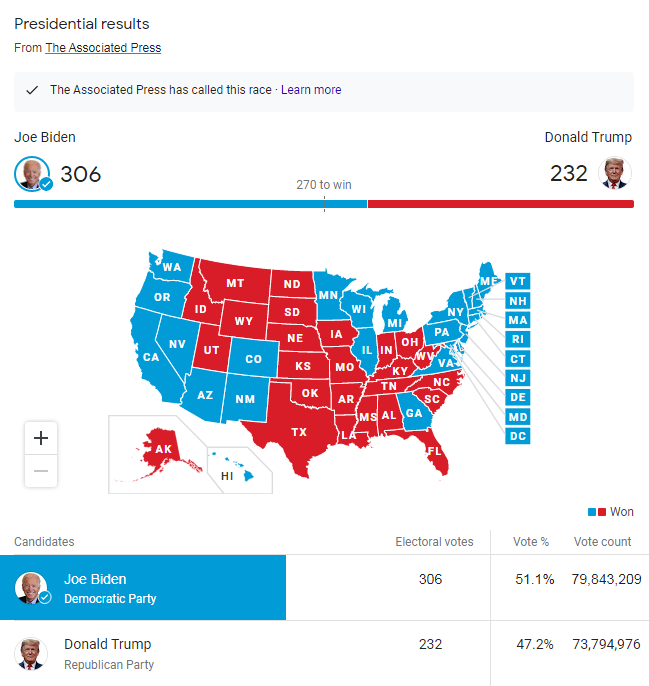 One would think if Democrats voting in person and by mail voting for Joe Biden also voted for Democrat candidates down-ballot, they would’ve greatly increased their majority in the House and retaken the Senate.

This did not happen.

As Biden voters celebrated in the streets this past weekend, Democratic politicians began to fight among themselves. Although they won the presidency, Democrats lost seats in the House and failed to flip a single state legislative chamber. What went wrong in down-ballot races?

That was the subject when House Democrats held a three-hour post-mortem conference call last week. Agitated moderates argued that Republicans easily aimed debilitating attacks at left-leaning positions on defunding the police, Medicare-for-all and socialism. Rep. James E. Clyburn (S.C.) warned that the party should tone it down to win the Georgia runoffs and take control of the Senate.
— Washington Post, 11/10/20

One can easily surmise that the ONLY way Biden could have won the presidency while his fellow Democrats lost seats is that millions of votes were submitted that either had only his name filled in or Democrats voted for ol’ Joe and against those down-ballot which is highly unlikely.

Meanwhile it does appear President Trump’s legal 73,795,681 votes did do the logical thing: Republicans down-ballot benefited from his record-setting performance, and the “Blue Wave” wasn’t even a trickle.

With more than 50 races still uncalled as of early Wednesday afternoon, House Democrats hoping to grow their majority had failed to defeat a single Republican incumbent, while they lost a handful of seats in Trump-friendly districts and two in a part of Florida considered central to President Donald Trump’s victory in the state.
— Roll Call, 11/4/20

Which again opens the door the Democrat media refuses to open: the logical probability that nefarious goings-on happened and millions of votes were hurriedly inserted into the system helping Joe Biden win; selecting down-ballot Democrats was obviously harder to do on short notice and not the immediate priority.

Maybe that’s why so many Democrats are pissed off, especially those who lost their races.

It was all about Joe. All others weren’t even considered as, whatever happened on election night, taking time to make things look more reasonable would require more effort than some thought the down-ballot were worth.