So Kids Can Turn in Parents? Careful, That Can (and Should) Go Both Ways

We’ve now had another instance of a kid, who was living at home, turning in a parent for involvement in the Capitol Hill riot.

A Texas teenager who alerted federal authorities about his father’s alleged role in the Jan. 6 siege on the U.S. Capitol says he wants others to know that “it’s OK to come forward. I want people to know how awful this political strain can be on certain people,” Jackson Reffitt, 18, told ABC News’ T.J. Holmes in an interview airing Tuesday on “Good Morning America.”

The Federal Bureau of Investigation arrested Jackson’s father, Guy Reffitt, at their home in Wylie, Texas, northeast of Dallas, on Jan. 15. He is accused of unlawful entry on Capitol grounds and obstruction of justice. Jackson Reffitt told ABC News that he is now in hiding and has cut ties with his family, who he said is upset with him for calling the FBI tip line weeks before the Capitol siege to alert them about his father.
— ABC News, 1/26/21

This is not a new phenomenon in conjunction with that event….

A daughter has publicly shamed her own mother for being punched in the face during a violent encounter at a Pro-Trump protest in Washington D.C on Wednesday. Helena Duke, 18, identified her mom in viral video footage from a fight which broke out near the Capitol during the insurrection, telling Newsweek she was “disappointed to be related to her”.

“Hi mom remember the time you told me I shouldn’t go to BLM protests bc they could get violent … this you?,” Helena Duke wrote on Twitter in response to the video.
— New York Post, 1/8/21

So, what are the ramifications for turning in a parent? Well, there are short-term default mechanisms available. 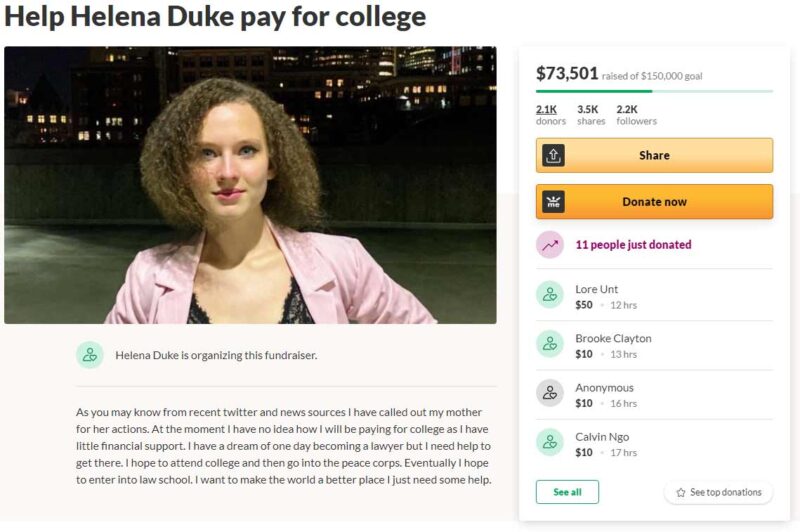 It kinda’ makes one wonder where this civic obligation was last summer when “mostly peaceful” riots resulted in billions in damage, injuries and death, and thanks to dozens of online pictures and video, identities had to have been known?

As said in 2003 during my second television program, the ONLY thing we legally owe our children is food, clothing and shelter. From conception through the 18th birthday, the monetary outlays given to children out of love could be in the hundreds of thousands of dollars if one was to also add gifts and entertainment activities to that amount.

But because of what children are taught in schools (behind the parents’ back), they now believe they are morally obligated to subject their parents to arrest, fines and legal bills just because they support a political movement the kid does not. 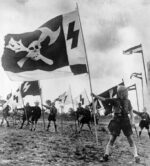 This is nothing new.

The Nazi Party knew that families — private, cohesive groups not usually under political sway — were an obstacle to their goals. The Hitler Youth was a way to get Hitler’s ideology into the family unit, and some members of the Hitler Youth even denounced their parents when they behaved in ways not approved of by the Reich.
— How the Hitler Youth Turned a Generation of Kids Into Nazis

These shortsighted narcissists should be very careful. 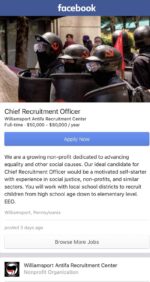 If these self-righteous children believe they’re obligated to report their parents to law enforcement for political and/or social transgressions, there are hundreds, if not thousands of parents who now MUST call the cops when they find out their spawn have been coordinating with any “Occupy”, “social justice” group and the likes of Antifa. They should immediately call the cops when they see suspect black clothing and facial coverings in their kids’ closet, they were out when traffic was disrupted, local monuments were toppled, storefronts were smashed and looted, buildings set on fire, police officers attacked and injured, and innocent bystanders were murdered in cold blood.

Yes, there is a legal obligation to report crimes you know were committed. But there are also laws to protect family members from having to testify against each other. That’s probably one reason we don’t currently have hundreds of children and young adults facing local, state, and federal charges for everything from vandalism to murder. Parents haven’t ratted out their kids out of love. But love, as we all know, must be a two-way street and if it isn’t, all bets are off.

Many parents have more than enough probable cause to have their children arrested for participation in “peaceful protests” that are intentionally hijacked and turned into opportunities for willful mayhem.

Out of the over 120 Tea Party and Trump rallies held since the late 90’s, the Capitol Hill “riot” was one of only a few times where infiltrators turned the event from its usual peaceful into something else. Black Lives Matter, ShutDown, Occupy, Antifa gatherings almost always end the same way: damage, injury, and sometimes death and the participants are mostly young adults living at home.

Tell your child if he or she will call the cops on them, they’re no longer welcome in your home and you’ll throw out everything they personally paid for out in the street. That should fit into a backpack. If under 18, see how they like foster homes.

Parents should exercise their civic duty because they can be held legally liable if they know their nice children are participating in unlawful behavior and say nothing. If enough parents turn in these wayward children, neither GoFundMe donors or activists will be able to keep up with the bail needed to keep their sorry asses out of jail.

If children want to rat on their parents for social media brownie points, fine. But these things can go both ways and maybe, from now on, they should.