‘Russia Collusion’ Unravels: Playing Dumb is What the Media Does Best

One would think the whole “Russia collusion” media action line would have been put to bed in 2017. But if there’s one thing we know for sure; journalists, like teachers, enjoy the myth of their never being wrong even though their functional level of intelligence can (and should) always be questioned.

With the recent revelation of Special Counsel John Durham’s court filings that have pretty much, using the left’s favorite conversation-crusher, “debunked” the whole Trump-colluded-with-Russia-to-steal-the-2016-election-from Hillary fiction, the media got the official cue to look the other way in response to Tucker Carlson’s breakdown of the falsehood they (and Democrats) inflicted on Donald Trump, President Trump, his supporters and the nation for years.

Leave it to Media Matters and the predictable others to ignore the bulk and substance of the segment and possibly point to a dead guy who can’t offer any clarification or even facts.

The NYT/CNN/NBC axis flooded the zone every time Robert Mueller scratched his nose. They spent hours and hours deciphering his every sneeze. Actual criminal indictments from Durham of Hillary’s lawyer or FBI operatives — crimes that created Russiagate — barely merit an article.
— Glenn Greenwald, 2/13/22

There are many consistencies when it comes to how this whole Durham investigation is playing out. One being that whenever there’s bad news for a Republican, there’s always someone who’ll leak that damaging info to an eager liberal media to disseminate. But when there’s bad news about a Democrat, nothing is leaked and if it is, it’s downplayed by the press. Aside from court filings that are public record, there’s been enough radio silence that the media’s been able to portray Durham as much ado about nuthin’… until now.

This is also where the media has itself stuck in the proverbial box where they have to either admit they were played by Hillary Clinton, her campaign and the DNC, or they knew Donald Trump never colluded with the Russians during his 2016 campaign and throughout his term as president. The latter is probably closer to the truth and the world saw how they were all in for the pro-Hillary/Democrat narrative.

The media really can’t admit they were suckers for Hillary’s disinformation as that would place an even bigger storm cloud over their already pitiful reputation for impartiality and honesty, but alas, that appears to be the only plea they can cop. As they gaslight the world claiming to be fair and impartial, their only remaining option is to admit to being overpaid, and in some cases, multi-millionaire suckers.

Why will the media seek such forgiveness? Because it’s not over.

Most Democrats want Hillary Clinton investigated for any role in Russiagate scandal: poll 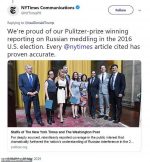 We don’t know how many people in the media have been hauled in to testify in front of Durham’s grand jury. It stands to reason that players currently under investigation may have passed on slanderous information to members of the media for rapid circulation; information known to be false yet published anyway. It’s not a crime for a First Amendment-protected journalist to distribute lies, but it sure can put a dent in a resume and public reputation to his or her employer. The chances are pretty small that so many supposedly smart people could have gotten it all so wrong, thus it stands to reason too many were happily all-in on pushing false stories on the Donald Trump they collectively hated. They had no problem amplifying falsehoods that resulted in many people having to lawyer-up and some even seeing the inside of a jail cell.

As the Durham investigation nears its conclusion, look for legacy media so-called journalists and anchors try and paint a scenario where they just may have gotten inadvertently ensnared by bad opposition research and tactics. You know, we all make mistakes and they always remind us that Americans are very forgiving people. They will soon try and demand we forgive them because they’re all we have when it comes to getting news we can trust.

Take their word for it… IF they talk about it at all.