When Libs Talk ‘Gun Violence’, What Groups Do They Always Leave Out?

With the unfortunate aftermath of the church shooting in Texas, the liberal left and their media has yet again taken this as a “crisis” not wasted.

Texas church mass shooting leads to calls for prayer — and gun control
It’s Not Too Soon to Debate Gun Control
Lax Texas Gun Laws, the NRA and Another Horrendous Deadly Mass Shooting
Murphy: ‘No one is safe’ until Congress acts on gun violence

While it literally took minutes for the left to politicize the Sutherland Springs shooting, they were also the first to demand we NOT publicize the New York City truck attack due to the profile of the perpetrator.

There was a particular posting from October 4th that came across the radar that peaked attention because despite the carnage that happens daily in Democrat, gun-controlled meccas like Chicago (which mainly involves politically insignificant black people), the BBC highlighted the fact that most “mass” shootings are mostly carried out by “white” men. 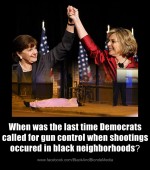 BTW — As of October 31, there were 569 deaths in Chicago; a death toll mostly involving black-on-black violence Democrats and their media ignore, as the symptoms leading to inner city crime is intentional neglect that can be used for vapid reelection themes and liberal nonprofit and government services growth.

Since 9/11, approximately 110 people have been killed and 495 wounded in the United States by a group not-white and suspiciously omitted by the BCC list with numbers said to be obtained by the FBI and Mother Jones.

Anyone want to take a guess at what that group is?

Muslims have carried out horrific attacks all over the world in concert venues, restaurants, media offices, on the streets, and we NEVER hear Democrats call them out, demanding gun, knife, hatchet, machete, or vehicle control. Instead, attacks are lamented, reasons are found to excuse the motives of the attacker, and they lay blame at anything else, like online recruitment, instead of religion-fueled murderous hate.

Liberal Democrats want to take away the guns of law-abiding Americans and veterans (with PTSD for starters), highlighting the race and possible political beliefs of the shooter (providing he isn’t a Bernie supporter) is fair game, but whenever a Muslim commits mass carnage, Americans are reminded who the real victims are…. 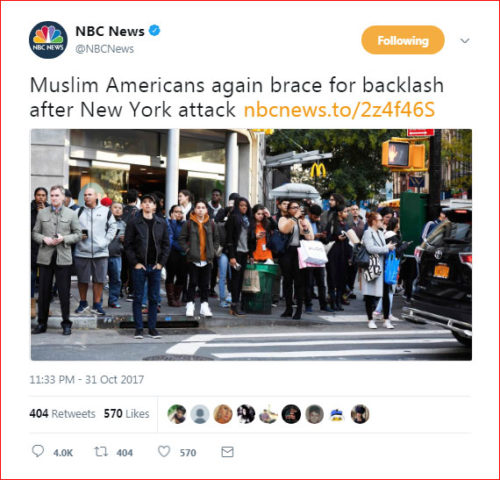 While “backlash” against Muslims after an attack is something yet to be enumerated, aside from the hysterics coming from Council on American-Islamic Relations or the Southern Poverty Law Center, the major contribution of Muslims on our society since our 9/11 awareness has been increased screening inconvenience at airports, ugly barriers on streets and on sidewalks, not to mention the “special treatment” instead of the equal treatment they demand.

The assertion that gun violence is a “white male” problem is misleading at best, a blatant political lie at worst. Deliberately omitting the statistics of those suffering from gun violence in poor Democrat districts as well as those they consider a protected minority is what we’ve unfortunately come to expect from the media, both in the United States and abroad.