Conservative Activism: For Too Many, It’s All About Being on Fox News

If you happen to watch any of the left-leaning news channels, you’ll mostly see them inviting guests and/or pundits who have a resume of effective activism. You may not like their overall objectives, but at least they’ve demonstrated skin in the game and their initial motivations were genuine. The same cannot be said for the right.

There are many conservatives who dutifully work behind-the-scenes to advance causes and push back against liberal policies and laws they deem harmful. Unfortunately, there are also a lot of people who’ve just discovered an issue, are outraged, post a rant on social media, and become an overnight sensation. One would want to believe their intentions are sincerely about an issue, but in the instant-gratification world we live in, coupled with audiences that are quick to show praise without examining possible motivation, we’re now being inundated with narcissists who believe they have something to say; something we’ve never heard about until they came along and now want to be the next Moses to take us all to the Promised Land. 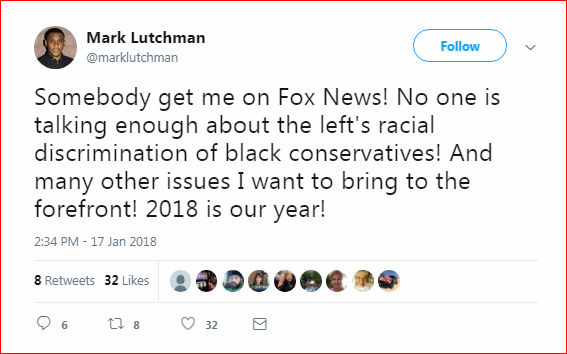 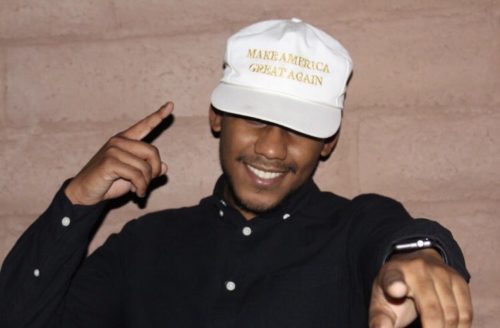 At least he didn’t wear a Trump dress.

Note the arrogance here as Lutchman assumes, despite his limited life-experience (he’s 23), “No one is talking enough about the left’s racial discrimination of black conservatives!” and there are “many other issues” HE wants to bring to the forefront. Newsflash: many have been talking about this for decades. Obviously, he just hasn’t been led by the hand and shown where to look.

But he’s not alone, the motivations are almost totally self-serving, and Fox News is the Holy Grail to many in the movement because it can now literally lead to a job in and around the Trump White House, even though some fought against him during the 2016 presidential primary.

We sadly know many conservatives who are issue-illiterate because if they didn’t see it on Fox News, it never happened. What’s worse are those who know what the conservative media believes their audience prefers and are quick to oblige.

If Mr. Lutchman was really paying attention, he’d know his chances of making it anywhere near FNC are pretty low because he’s probably not very secure walking in six-inch heels. If he does get an opportunity to appear, it will be about one topic and one topic only: race, and those opportunities will be limited to a specific, breaking event.

But this is not at all just about black conservatives by any means. There are many out there whose overall goal is not just the mission but personal stardom, at least stardom as they personally define it.

As a guest and studio supervisor for on-air talent who appeared via remote “drop”, getting on Fox News was an overrated experience. You’re only on for less than four minutes and much of that time is the host setting up the segment to the audience and then giving his or her opinion, leaving that person steered into saying he or she agrees with the host as often as possible.

But if it’s all about being famous and becoming the latest conservative “it”, go for it and don’t expect everyone to blindly go into seal-clap mode. In the case of those who’ve just discovered black conservatism, they will find all the praise they desire on Facebook and Twitter.

Doing something that really makes a difference?

Uh oh. That’s too hard and it’s clear some wouldn’t even know where to start.